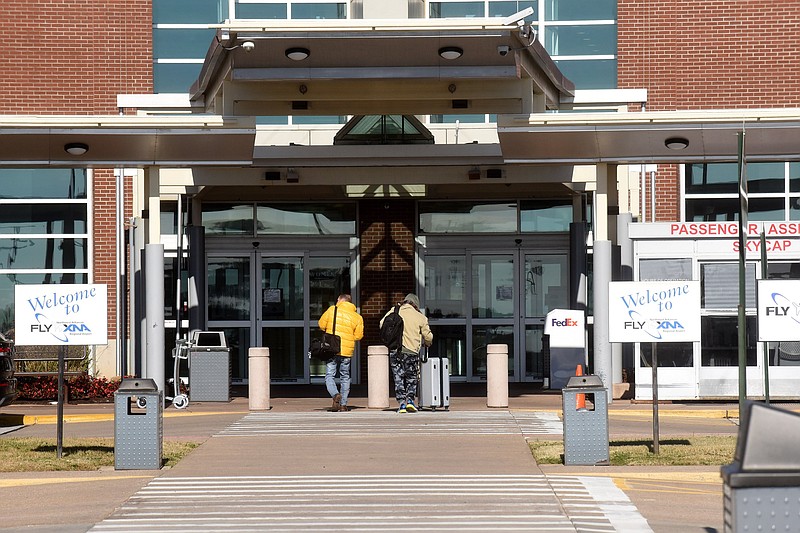 HIGHFILL -- Northwest Arkansas National Airport officials are exploring how to amicably divorce themselves from the city of Highfill, but the city's mayor said the move could be economically catastrophic for the city.

"I think it's time for the board to have a discussion; it's something we've talked about for quite some time, and that is de-annexation from the city of Highfill," said board member Jonathan Barnett, broaching the subject. "I think the time has come. Highfill is kind of coming into its own. Highfill has come a long way."

Barnett, who represents Benton County, said the airport needs to continue a good relationship with the city but, with a lot of the projects the airport is planning, it needs more autonomy.

The board voted unanimously Wednesday to have staff explore the pros and cons of de-annexing from Highfill, as well as how the process would work and what approach to take. The board will be hosting state legislators next week, and the issue could be discussed then.

Highfill Mayor Michelle Rieff she does not want to see the airport de-annex from the city, which surrounds the airport on four sides.

"A very large part of our revenue comes from the sales tax that we receive from the airport," Rieff said. "We have two bonds and two cents of our sales tax is dedicated to paying back those bonds. They amount to $7 million. This could impact the city in a very negative way, financially."

Highfill gets sales tax money from seven or eight food vendors at the airport, six car rental companies, and other various retailers, according to Rieff.

"So you can imagine the hit that would make to Highfill," Rieff said.

Rieff said the city spends $700,000 a year on bond debt service. The city has projected it will receive $750,000 in sales tax proceeds next year. Rieff said bond attorneys for the city are working up some numbers to share with airport officials, showing the financial impact on the city should the airport de-annex.

"I don't know how we would make up that deficit and repay those bonds because Highfill doesn't have a lot of businesses and industry right now," Rieff said. "It's concerning."

Airport officials said Highfill has benefited from tax dollars generated by the airport, but the airport gets no services from Highfill in return.

"Looking at it from a standpoint of the services that are provided and the opportunity for us to use some of that revenue for airport purposes, we think it is a good thing," said Aaron Burkes, airport CEO. "We're really benefiting a tiny community which hardly makes up our customer base and they don't provide any real services to us, literally, other than buying water from them, which we can buy from Bentonville. We don't get a lot of municipal services that go along with that."

The Northwest Arkansas Regional Airport Authority, which runs XNA, has its own police and fire departments and maintains the roads on airport property, officials said.

Money the airport now pays to Highfill -- about $500,000 per year -- could be used for airport projects that benefit the region without restrictions, Burkes said.

Another issue is Highfill is not a member of the authority, which consists of representatives from Bentonville, Fayetteville, Rogers, Siloam Springs, Springdale, and Washington and Benton counties.

"It seems a little strange that here we are, this regional entity, and we've been sucked up in a small municipality, and yet we have a lot of the powers that a municipality has," Burkes said. "I understand the reason for it from their perspective; it was a great source of revenue for them, but we're still going to provide the stimulative economic effect whether we're part of them or not."

Burkes said the new access road to the airport would provide Highfill with more opportunities for growth. And the growth is already happening, with several new subdivisions going in nearby, he said.

"That's going to increase their ability to fund their sewer projects and things like that," Burkes said. "They're getting big enough to where they don't have to be so reliant on basically one revenue source."

The airport is in a unique position, he said.

"We're pretty unusual in that we're a major airport that kind of got gobbled up in a hostile takeover, if you want to call it that, by a small municipality that saw a revenue stream, basically, and we didn't have a vote," Burkes said.

Highfill -- then with a population of 320 -- in 1995 annexed much of the then newly announced airport site with the consent of the landowners. Then, by a 40-to-7 vote, residents annexed more of the area in 1997. The airport opened in November 1998.

Philip Taldo, a board member from Springdale, said he's sensitive to the issues facing small towns and the airport will still have to maintain a relationship with the city.

"These roads and streets don't end when they get to our property line," Taldo said. "So, we need a plan, I think, that is not all one-sided. We've got to keep in mind that we're going to depend on them keeping up roads and highways getting to us. We don't want them putting saw horses across the road."

Burkes said the airport has maintained a good relationship with Highfill, and they've been helpful in land use planning around the airport in relation to noise. Rieff said the city has been careful to keep zoning near the airport compatible and is looking at passing an avigation ordinance next week for land under the approaches to the airport.

"None of us are really looking, I don't believe, to negatively impact Highfill," said Mike Johnson, who represents Fayetteville on the authority board. "We're looking to the future, the long term, how can we operate for the best of the region."

Road to the future

Plans for a new access road to the Northwest Arkansas National Airport are on schedule for the project to be bid in early 2024, and construction could begin in the first part of that year as well, officials said Wednesday. Completion would come in 2026 or 2027. Money for the project has already been identified in the Arkansas Department of Transportation’s plans for the next few years.

The route preferred is a fairly straight shot from a new interchange on the Springdale Northern Bypass, just west of the Arkansas 112 interchange, to the entrance of the airport. It follows the Osage Creek valley for much of the way. Plans call for the road to be 3.4 miles long with a 70 mph speed limit.

“Hopefully, we can break ground in the not too distant future,” said Mike Johnson, who chairs the Authority’s Access Road Task Force.

Print Headline: XNA officials looking for a way to amicably split from Highfill