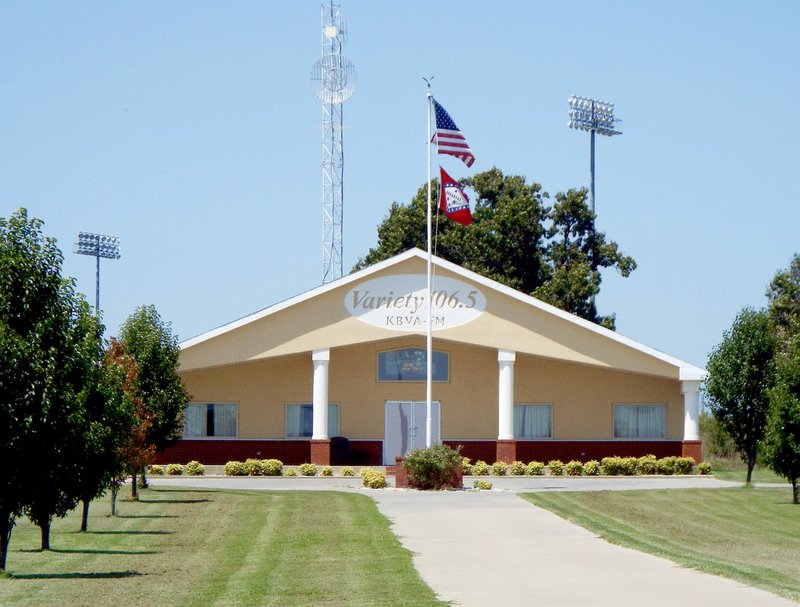 Photo by Randy Moll After 26 years of broadcasting, Gayla McKenzie&#8217;s KBVA Variety 106.5 will change hands on Tuesday, becoming part of Hog Radio. Programming will remain as close as possible to the current format.

GRAVETTE — The transition should be smooth and almost seamless when Hog Radio, Inc., a part of the Bunyard Media Group, takes over the operation of the KBVA FM radio station on Tuesday, according to Candace-Dixon Horne, general manger of Hog Radio in Springdale.

Instead of being called "Variety 106.5," the KBVA station will identify itself as "Lite 106.5," Horne said on Friday. And, while the music libraries and play lists put together by Gayla McKenzie during her 26 years as radio station owner and manager were not purchased, the station will still play music targeted for the same demographic, Horne said, generally, listeners who are 50 and older, though many younger listeners have been tuning in as well. Horne said the music may even be a little more narrowly targeted toward that particular age demographic.

Also to be continued are Sunday's inspirational music and Fox News, Horne said. Like other Hog Radio stations in northwest Arkansas -- ESPN-KAKS/KUOA 1290 AM and 95.5 FM; KFMD-FM "Star 101.5"; and KCYT-FM "96.7 The Coyote" -- weather broadcasts will be from KFSM-TV, Channel 5, weather.

"We're going to make the transition as smooth as possible for our listeners and sponsors," Horne said. The powerful FM station serves listeners in northwest Arkansas, southwest Missouri and northeast Oklahoma.

Though listeners should hear little change, the radio station will be operated out of Hog Radio's studios in Springdale, starting Aug. 1.

No full-time local jobs will be lost when the transition occurs because staff had already been downsized by McKenzie, according to Horne. McKenzie said her announcer, a part-time employee, would be looking at other employment options after the operation of the station changes hands next week.

"We're proud to have this great moniker on our doorstep," Horne said, calling the station a great addition to the media group's local offerings. She said the Hog Radio group is locally owned and is now "the proud owner" of the popular KBVA station.

KBVA began broadcasting in 1991 and was started and operated by Gayla McKenzie, daughter of state representative Kim Hendren and niece of Gov. Asa Hutchinson. And the station was operated as a family business, with Kim Hendren reading each day's weather reports and her mother, Marylea Hendren, being the station's sales manager.

In an April 26 post on KBVA's Facebook page, McKenzie said, "In September of 1991, KBVA, Variety 106.5 joined the northwest Arkansas airwaves with its first broadcast song, the theme from "Gone with the Wind," by the Boston Pops. This is Gayla McKenzie, owner and programmer of Variety 106.5. It has been a great pleasure to program the variety music for 106.5 for the past 26 years.

"During that 26 years, a lot has changed in northwest Arkansas and in my life. I married, had two daughters and will be seeing the oldest daughter off to college this coming fall. And now, after 26 years, it's time to welcome more change, even though it brings some sadness at the thought of saying goodbye to our listeners and advertisers.

"I've agreed to sell Variety 106.5, pending FCC approval. We will continue broadcasting our variety music pending that approval. So please stay tuned and make plans to join us for the next couple of months. We want to dedicate this time to thanking our listeners by offering some great contests and prizes. We also look forward to sharing some special memories with you. As always, thank you for listening to Variety 106.5."

McKenzie said she handled the programming for each day for the 26 years she owned the station and "loved every minute of it." She said she thought it was time for a change in her life and wanted to do something different while she could still say she loved her work in the radio business.

McKenzie said she had no immediate plans for her working career but would consider options in the coming weeks.

"I'm certainly not ready to retire," she said.

The station broadcasts from a tower just north of Y-City Road, between Gentry and Decatur and has an effective output of 37,000 watts. The station's studios are currently located at 1512 W. Arkansas Highway 72 in Gravette.

Print Headline: KBVA will change to 'Lite 106.5' on Tuesday