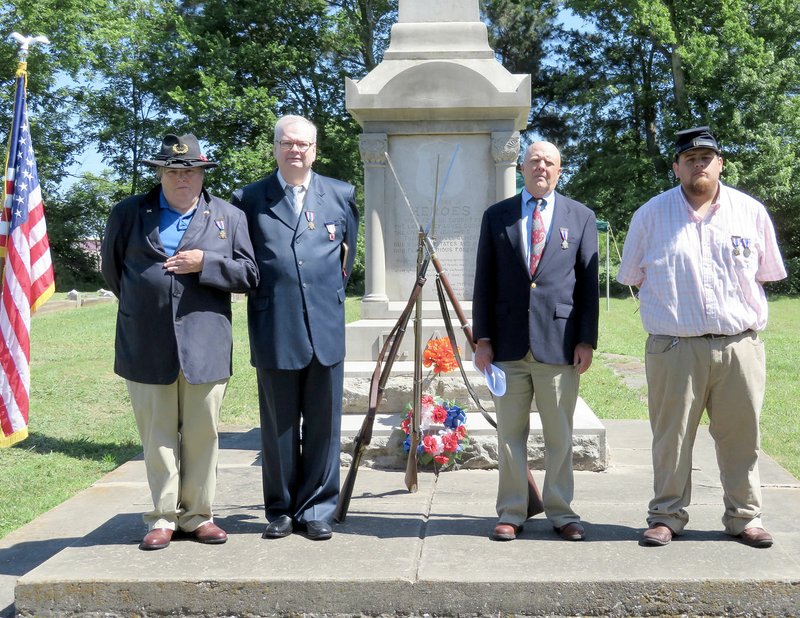 Westside Eagle Observer/RANDY MOLL Sons of Union Veterans Bob Underdown of Elm Springs, chaplain Clint Willis of Siloam Springs (also chaplain for Sons of Confederate Veterans), company commander Joe Rainey and Christopher Bribiesca Jr. of Bentonville were part of a redidication ceremony on Saturday, May 26, 2018, at the Grand Army of the Republic monument in Gentry Cemetery which was originally built by David Kost and dedicated by former Union and Confederate soldiers in 1918. The monument was recently added to the National Register of Historic Places.

GENTRY -- It was 100 years ago today that the Grand Army of the Republic monument in Gentry Cemetery, which was recently added to the National Register of Historic Places, was first dedicated by Gentry residents and members of G.A.R. Harker Post 104. The monument built by David L. Cost, a former Union soldier who lived in Missouri and then Gentry following the Civil War, was rededicated on Saturday by Sons of Union Veterans and Sons of Confederate Veterans at a special ceremony at the monument.

The original dedication, held May 30, 1918, during the last months of World War I, was a very special occasion. According to the Journal-Advance, Gentry's newspaper at the time, a Sunday program for Memorial Day was held on May 26, with the choir singing a doxology, Rev. Brown giving the invocation, two more songs by the choir, a Scripture reading by Rev. J. Marshall Dempsey, a prayer by Rev. F.A. Bruner, a sermon by Rev. D.H. Holland, "America" sung by the audience and led by the choir, and the benediction spoken by Chaplain O.L. Sumner.

Then, on the morning of Memorial Day itself (often called Decoration Day because of the flowers and decorations placed on the graves of soldiers), May 30, 1918, all the old soldiers of the Blue and the Gray, with their friends, met at the auditorium at 9 a.m. and proceeded to the cemetery for 9:30 a.m. ceremonies. According to the May 24, 1918, issue of the Journal-Advance, Grand Army of the Republic exercises were held at the pedestal, followed by the decorating of graves. Then the group marched to the G.A.R. monument erected by D.L. Kost. The song "America," better known today as "My Country, 'Tis of Thee," was sung. Kost presented the monument and it was dedicated by the G.A.R. Post, with an address by Kost, another by J. Marshall Dempsey and a benediction by Rev. T.J. VanHorn.

On the afternoon of May 30, the group again gathered at the auditorium where the choir sang and the General Order of Chief John A. Logan was read by O.L. Sumner, and General Orders were read by Adjt. C.H. Parrish. Following a song by the choir, Abraham Lincoln's "Gettysburg Address" was read by Miss Jewel Tygart.

The choir sang the "Star Spangled Banner." An address was given by Rev. Gather of Siloam Springs. The audience was led by the choir in again singing "America." And the benediction was spoken by Rev. F.A. Bruner.

The Sunday service, which was to begin at 2:30 p.m., as printed on the front page of the Journal-Advance, was moved up to 11 a.m. by the time Page 2 was printed to allow some to accompany local soldiers, called up to fight in WWI, to report in Bentonville.

A letter of thanks was printed in the Journal-Advance two weeks later under the headline "Harker Post No. 104 votes expression of appreciation." In the letter, thanks were expressed to the pastors of several churches, to the singers, the owners of automobiles who carried passengers to and from the cemetery, Miss Jewel Tygart for her "able rendering of Lincoln's Gettysburg Address," to Rev. C.D. Purlee "for coming to our relief at a time of disappointment," and to "any and all others who rendered assistance by flowers donated," and to Arthur Tallman for publishing notices and programs in the Journal-Advance.

Though the G.A.R. monument was never hidden and is visible to motorists passing on Pioneer Lane, it recently caught the attention of those seeking to preserve history and was added to the National Register of Historic Places. Its significance is tied to the fact that it is a monument to Union Soldiers in Arkansas, once a Confederate state.

According to Mark Christ, a spokesman for the Arkansas Historic Preservation Program, Arkansas has more than 20 Confederate monuments, but fewer people know about the state's four monuments that honor Union soldiers. Christ said he didn't find out about one of those monuments until just about a year ago after reading about it in a back issue of The Benton County Pioneer, a publication of the county's historical society.

The 18-foot-tall monument was nominated to the National Register of Historic Places, on which the other three Union monuments in Arkansas are already listed. And it was added to that list earlier this year.

As a result, a small group of representatives from the Sons of Union Veterans and the Sons of Confederate Veterans came together again in Gentry Cemetery on the morning of May 26 to rededicate the monument which had been all but forgotten.

Three rifles with bayonets -- replicating the type of rifles used by Union soldiers during the Civil War -- stood before the monument, their bayonets entwined.

Following a prayer by Clint Willis, Th.D., of Siloam Springs and chaplain for both the Sons of Union Veterans and the Sons of Confederate Veterans, and the Pledge of Allegiance, Joe Rainey, camp commander for the Northwest Arkansas Chapter of the Sons of Union Veterans, spoke of the Gentry monument's history, of the history and work of the Grand Army of the Republic and its chapters. He spoke of its work to help the widows and orphans of fallen Union soldiers and of its work decorating the graves and commemorating the war dead. He cited the orders of General John A. Logan.

He spoke of the monument's builder, David L. Kost, who fought in Company H, 65th Ohio Infantry Regiment and, after the war, served a term in the Missouri House of Representatives and two terms in the state Senate before moving to Gentry in 1894, where he bought a farm outside of town and operated a newspaper. He said Kost was instrumental in forming Gentry's G.A.R. Post in 1897, named after Brigadier General Charles Garrison Harker, the commander of the Ohio 65th in which Kost served and who was killed in battle at Kennesaw Mountain in Georgia.

Kost, who earned a law degree following his service in the Civil War, was an early owner of the Gentry Journal, a forerunner to the Gentry Journal-Advance and to the Gentry Courier-Journal which merged to help form the present day Eagle Observer. According to available records, he and Joe Bennett purchased the paper from founder John Hann and Edwin Baker in 1895. He sold it to longtime owner Arthur Tallman in 1896.

Rainey said veterans on both sides had somewhat of a camaraderie because no one but the Civil War veterans could really understand what the soldiers experienced during their service in the War.

Kost died on July 25, 1925, and was buried in the shadow of the monument he erected. Also buried there are his wife, Laura S. Kost, and their daughter, Nona May Kost.

Following Rainey's address, the small group joined in singing "America" ("My Country 'Tis of Thee") before posing for photos at the monument and recessing for lunch.

The Gentry monument was installed by the Grand Army of the Republic, a national organization of Union Civil War veterans that also put monuments in Evergreen Cemetery in Judsonia in 1894 and Siloam Springs' Twin Springs Park in 1928.

Arkansas' fourth Union monument is in Little Rock National Cemetery. It was placed there in 1916 by the state of Minnesota and honors Civil War soldiers from that state who are buried at the cemetery.

The Grand Army of the Republic was initially formed to help the widows and orphans of fallen Union servicemen and to support the Republican Party but later focused on promoting patriotic activities and decorating the graves of the war dead, according to the National Register nomination, which was written by Christ.

The Grand Army of the Republic had at least 123 posts in Arkansas, Christ wrote. Several of them were in Benton County, including posts in Bentonville, Rogers, Springdale, Pea Ridge, Sulphur Springs, Garfield, Gentry, Siloam Springs and Nebo (later Gravette).

The inscription on the Gentry monument reads: "To the heroes who fell or fought for the land they loved during the Civil War, 1861-'65. Their sacrifices cemented our union of states and made our flag glorious forever."

The inscription also includes a few lines of verse, then indicates it was placed there in 1918 by David L. Kost, Company H, 65th Ohio Infantry Regiment.

Arkansas has 19 Confederate monuments, three memorials and eight cemeteries (or sections of cemeteries) that are listed on the National Register. That is in addition to the Confederate State Capital in the Hempstead County town of Washington.

Christ said there are other monuments to the Confederacy around Arkansas, including at least two benches and a couple of boulders. The state has a couple of monuments dedicated to those who died on both sides in the Civil War.

Although Arkansas seceded from the Union and fought for the Confederacy, loyalties were largely split between the Delta, which had a slave-based plantation system, and the mountains to the north and west, where farmers engaged in subsistence agriculture, according to the Encyclopedia of Arkansas History and Culture.

"Despite having the third smallest white population of any Confederate state, Arkansas supplied more troops for the Union army than any other Confederate state except Tennessee," according to the encyclopedia article written by Thomas DeBlack, a professor of history at Arkansas Tech University.

Bill Bowden contributed to this article.

MORE PHOTOS OF THE REDEDICATION