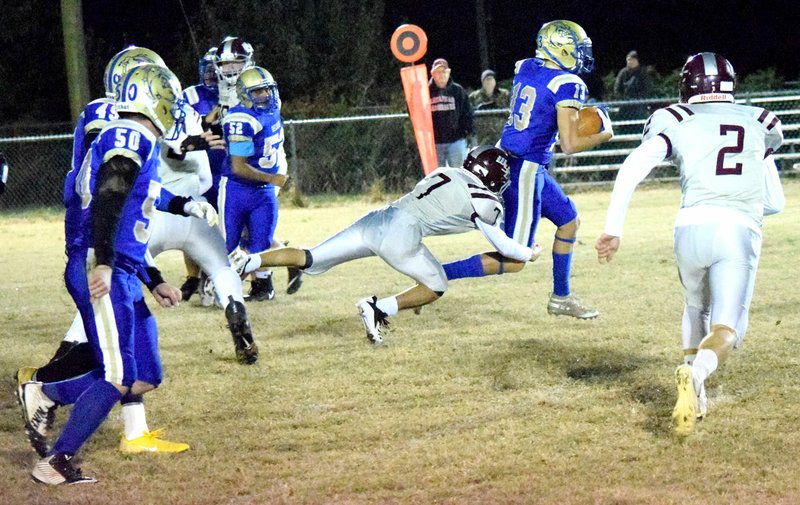 Westside Eagle Observer/MIKE ECKELS Sam Philpott (Decatur 13) tries to slip a Wolverine defender's tackle as he heads to the goal line during the Decatur-Western Yell eight-man football contest in Decatur Friday night. Philpott managed another 20 yards before the Wolverine defense brought him down just shy of the goal line.

DECATUR -- It was a perfect fall evening for Friday night football at Bulldog Stadium when the Decatur Bulldogs squared off against the Western Yell County Wolverines in the final eight-man contest of the 2019 season.

For Bulldog fans filling the stands, the night ended with the first and only win of the season.

Following the ceremony, the senior football members led the Bulldogs onto the field for the final time. Then it was time for four quarters of football.

The first quarter was more of a "whose defense is better?" contest as each side's goal-line stand prevented any runs or passes into the end zones. That soon changed when Decatur's Seth Coleman ran up the middle from the 15-yard line for the first touchdown of the night. The Bulldogs' two-point conversion attempt fell a yard short of the goal line, resulting in Decatur holding a 6-0 lead by the end of the quarter.

With 34 seconds left in the first half, Wolverine running back Adrian Hernandez scrambled past the Decatur defense and into the end zone for Western Yell's first score of the contest. Like Decatur, Western Yell's two-point conversion failed. As the seconds ticked down to zero in the first half of the game, the Bulldogs were firmly in control, up 18-6 over the Wolverines.

Soon after the start of the third quarter, with one minute elapsed off the clock, Wolverine running back Jaden Day found his way into the end zone for Western Yell's second score. Wide receiver Ethan Goff fought his way across the goal line for the conversion. But an illegal motion in the backfield penalty nullified the conversion, bringing the ball back to the Decatur 22 yard line. The Wolverines' second attempt failed, allowing the Bulldogs to maintain a six-point lead.

A short time later, Coleman made his third interception of the contest. The Bulldogs moved the ball to the 20-yard line on a reception by Coleman. On the next play, Coleman crossed the goal line for the fourth TD for Decatur. A quarterback keeper by Funk resulted in the first successful conversion for the Bulldogs, extending Decatur's lead to 14. The Wolverines closed out the third quarter with a third TD, cutting Decatur's lead to eight.

Sam Philpott opened the fourth quarter with a fumble recovery and ran to the Wolverine 15-yard line, a 70-yard run, setting up a 15-yard run by Funk on a quarterback keeper for the TD. Carlos Hernandez fought his way into the end zone for two points, giving the Bulldogs a 34-18 lead.

Western Yell managed to score one final touchdown before the Bulldogs put the contest away with a pair of touchdowns and a conversion to win their first game of the 2019 season, 48-24.

Senior Seth Coleman, playing his last game at Bulldog Stadium, was the big story of the contest with four interceptions and two touchdowns, contributing to Decatur's successful night of eight-man football.