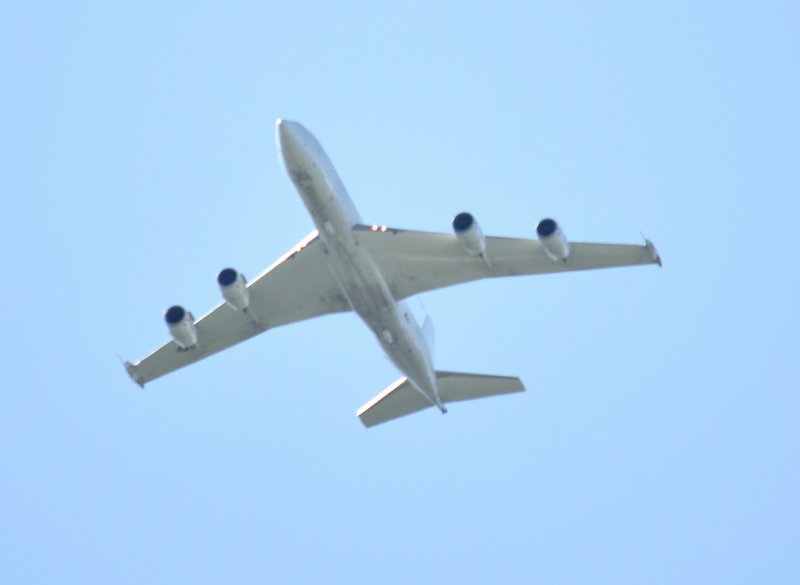 Westside Eagle Observer/MIKE ECKELS A Boeing E-6B Mercury airborne command post flies over Decatur April 21 after a training exercise at Northwest Arkansas Regional Airport in Highfill. The E-6B, the military version of the popular commercial jet liner 707-320, was flying at 3,000 to 3,500 feet (the legal pattern altitude at XNA) when it made this pass over the area.

DECATUR -- Mercury was rising over Decatur Apr. 21 but it was not the planet closest to the sun but was instead a rather big airplane named Mercury.

At 10:50 a.m. a Boeing E-6 four-engine jet made a low pass over downtown Decatur. Not since D.K. Bredehoeft's epic flight down Main Street in the Confederate Air Force's Boeing B-29 Superfortress in 1993 has something this big flown over Decatur this low.

A year later, on Aug. 7, 1955, test pilot Tex Johnson took “Dash 80” on a demonstration flight over Lake Washington near Seattle. The plane carried dignitaries from the major airlines as well as brass from the Air Force. Johnson did something unthinkable for a plane of that size; he barrel-rolled the 190,000-pound (loaded weight) “Dash 80,” much to the surprise of Boeing’s president, Bill Allen, who reportedly fired Johnson at least two dozen times as he drove back to the Boeing factory at Renton, Wash.

Johnson retained his job as a test pilot for Boeing on the condition that he never rolled a plane like the “Dash 80” again.

Over the past few years, Decatur has seen some big aircraft like the KC-135 flying gas station and even Air Force One (when Bill Clinton was president) but mostly at an altitude of 5,000 feet or greater. As for the E-6 Mercury, it flew somewhere between 3,000 to 3,500 feet as it transited the area heading north.

The story began a few minutes earlier, around 10:45 a.m., when a railfan stopped to watch Kansas City Southern's yard locomotives dropping off several grain cars on the Decatur siding near the depot. As the railroad enthusiast watched the train cross over the Third Street crossing, he noticed what looked like a small plane flying towards the depot. Thinking it was a Cessna or Piper making an approach to Crystal Lake Airport to the north of the city, he turned his attention back to the train.

As the plane got closer it became apparent that it was something much bigger and not going to Crystal Lake. The full nature of what this mystery aircraft was became apparent as it flew over the TNT truck stop. It was a 707 jet passenger aircraft, one of the early and most reliable passenger jets of the '60s and '70s. One question remained, what model aircraft was it and who owned it? As the big aircraft flew over Decatur, this question was quickly answered.

It was a Boeing E-6B TACAMO (Take charge and move out) flying command post or "Looking Glass" aircraft stationed at Offutt Air Force Base near Omaha, Neb., the home of the Strategic Air Command (SAC). This aircraft, like its sister ships stationed at Offutt, was originally built as 707-320s around 1963.

The mission of the E-6 was to fly over the United States and serve as an aerial command center for NORAD, North American Air Defense Command, which was located at the Cheyenne Mountain Complex near Colorado Springs, Colo., and the SAC facility near Omaha. There is at least one of these "Looking Glass" aircraft in the air at all times. Should the U.S. be attacked by nuclear missiles and both bases destroyed, the TACAMO aircraft would take command and coordinate this nation's response to the attack. A "Looking Glass" aircraft was in the air the day of the 9/11 terrorist attacks on New York and Washington, D.C.

This aircraft, now flown by the Navy, was most likely a backup aircraft transiting the local area on a training exercise and had just departed or was going into Northwest Arkansas National Airport.

The Mercury continued on heading due north and stayed at the same altitude, most likely returning to XNA for another touch-and-go series.

The United States Air Force, Navy, Army, Marine, and even NASA use XNA as a training platform to keep aircrews current in the operation of its fleet of aircraft or give new flight crews a chance to earn a type rating in different planes like the E-6B Mercury. This training is a vital tool to aid our armed forces in defense of freedom.

As for the train enthusiast, after the plane passed over, he turned his attention back to the switching operation at the Third Street railroad crossing.