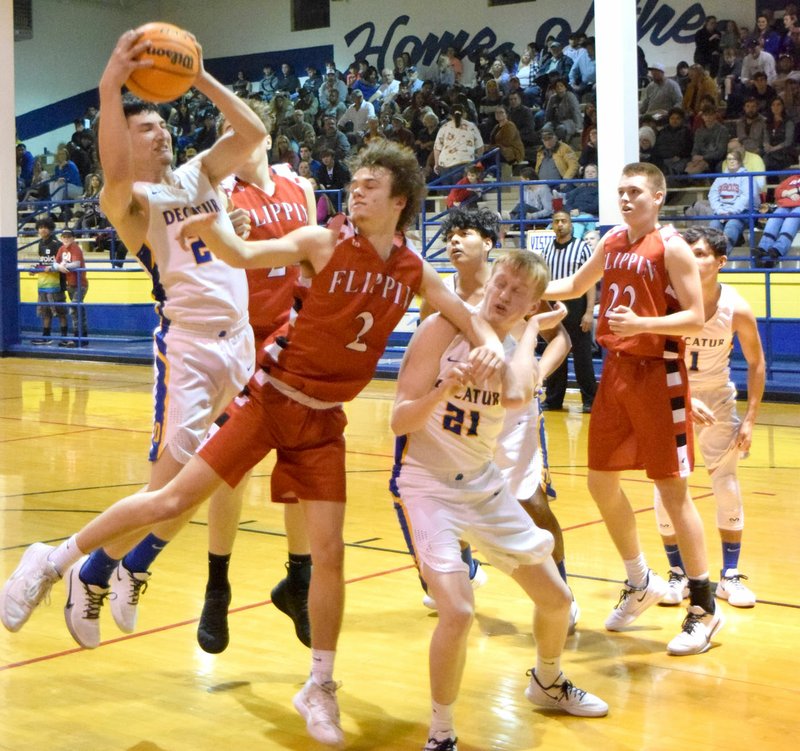 DECATUR -- The bleachers at Peterson Gym were packed with Bulldog fans and with fans who made the 150-mile trip to cheer on the Bobcats as Decatur faced the 2A Region 1 conference leader Flippin in an epic basketball battle Friday night. It was a struggle to the end, with Flippin taking the contest.

The Flippin Bobcats came into the Decatur Bulldog Colors Day contest with a perfect 8-0 conference record. The Bulldogs currently hold sixth place, ahead of Arts Academy of Arkansas, with a 1-8 record.

The Bulldogs scored first on a three-point field goal by Adam Garcia for the early lead. A minute later, Dale Smyser hit a layup for the Bobcats' first two points of the game. From that point, the two defenses worked to keep the scoring low, with the Bobcats holding a slim one-point margin over the Bulldogs going into the second quarter.

Much to the surprise of the Bobcats, the Bulldogs kept the remainder of the first half close, eventually tying the game at 29-all going into halftime.

In the third quarter, the Bulldog offense faltered, allowing Flippin to build a 13-point lead going into the final eight minutes of the contest.

In yet another surprise for the Bobcats, Decatur rallied together once again and overtook the Flippin lead with 4 minutes left in the game. But as quickly as it came, the Bulldogs went cold once again, allowing the Flippin Bobcats to hit a run that gave them the conference win, 58-46, over the Decatur Bulldogs.

Three Decatur Bulldogs were in double figures for the night. Tafari James led the way with 11 points, eight rebounds and forced three turnovers. Bryson Funk scored 10 points for the night, pulling down two rebounds and forcing two turnovers. The other Bulldog in double figures was Kevin Garcia, also with 10 points, eight rebounds, three turnovers and a steal. Trevor Girdner had four points, followed by Christian Ramirez, Adam Garcia and Konner Hunt, each with three. Edger Herrera rounded out the Decatur offensive drive with two points. Decatur totals for the Colors Day contest include 40 points, 22 rebounds, 10 turnovers and one steal.

The Flippin Bobcats had two players in double figures, Lance May with 20 points and Devyn Payne with 12.