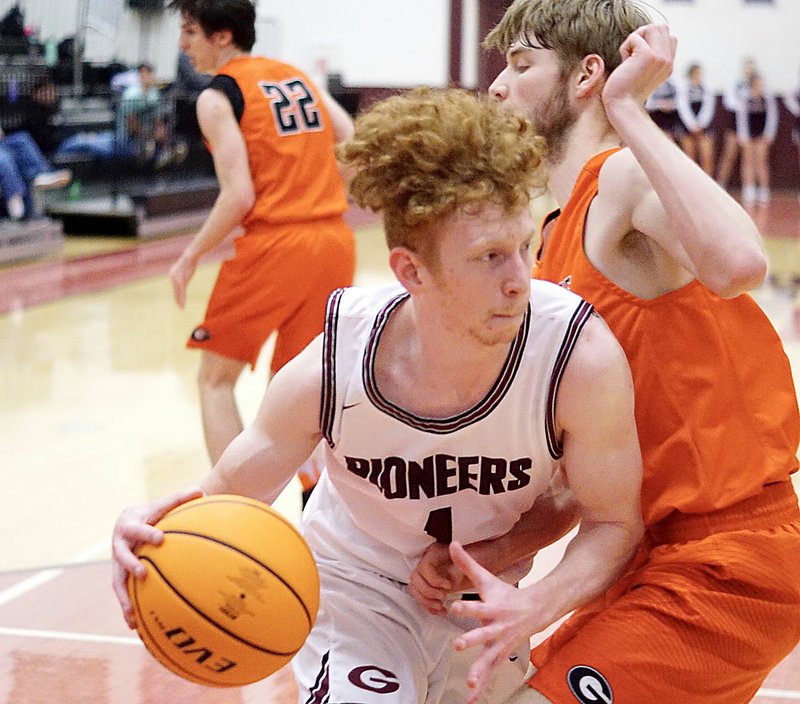 Westside Eagle Observer/RANDY MOLL Gentry senior Casey Bates tries to dribble around Gravette's Brayden Trembly to get under the basket during play in Gentry on Feb. 4, 2020.

GENTRY -- The visiting Lions dominated the Pioneers on Tuesday, Feb. 4, and took home a 48-31 conference win.

Though Gentry's Cory Hockenberry sunk a three-pointer and Casey Bates a pair of two-point goals in the opening quarter, Brayden Trembly of Gravette put in three goals, with Michael Duke, Jake Carver, Cordell Donnell and Johnny Dunfee hitting single goals to give the Lions a 14-7 lead at the end of the first quarter.

Isaiah Lemke hit a three-pointer in the second quarter for Gentry, and Brian Magana added a deuce and Bates a pair of free throws for seven; but Gravette's Donell hit two goals, Trembly one, and Kaleb Furlow a three-pointer to put Gravette up 23-14 at the half.

The Lions built on their lead in the third when Donell, Duke and Furlow hit three-pointers and Carver and Trembly hit one and two goals respectively for 15 more points. Bates and Magana hit two-pointers, and Andrew Godfrey a trey and two free throws to make it 38-21 at the end of three.

The final quarter was a draw, with each team picking up 10 points. Godfrey and Blake Wilkinson each added a trey, with Charlie Rheams and Magana and hitting goals for Gentry. On the other side of the court, Duke and Dunfee each had a pair of goals, and Garrett Hunter had one for the 48-31 final.

Leading the scoring for the Lions was Brayden Trembly with 12, Michael Duke and Cordell Donnell with nine each and Kaleb Furlow and Johnny Dunfee with six apiece.

For the Pioneers, it was Casey Bates and Andrew Godfrey with eight each.

The Lady Pioneers gave the Lady Lions a run for their money when they hosted their Gravette neighbors on Feb. 4 at Gentry High School.

With the score 12-10 Gentry after the first quarter, 34-26 Gravette at the half and 39-34 after three, the Lady Pioneers fought hard and scored 18 points in the final quarter, making it anyone's game up until the final seconds when Gravette pulled away with its 19 points to the 58-52 win.

Gravette junior Shylee Morrison led the Lady Lions in scoring with 17. She was followed by seniors Mallory Smith with 12 and Gabbi Scott with 10.

For Gentry, Meledy Owens had 18 (six 3-pointers), and Ariel Nix 15 in the game. Heidi Vinson had six in the game and Jaiden Wilmoth five.