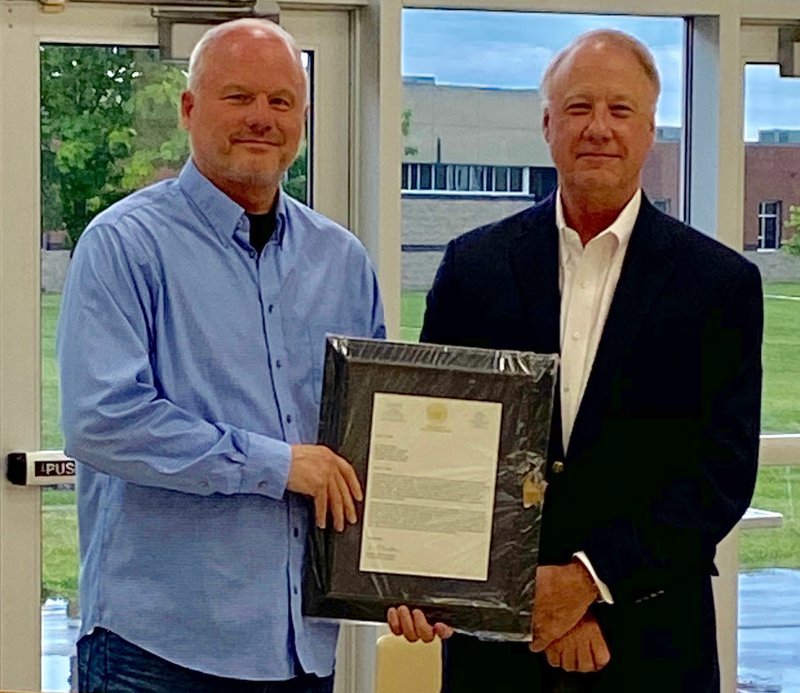 Photo by Hope Duke State Senator Jim Hendren presents Richard Page, superintendent of Gravette Public Schools, with a certificate of appreciation from the Senate for his eight years of service to the Gravette school district. Page is retiring at the end of the 2019-2020 school year. Hendren was a member of the school board which hired Page eight years ago.

State Senator Jim Hendren was in attendance and presented Page with certificates of appreciation from both the Senate and the House of Representatives. Hendren said he was especially glad to be able to present the certificates himself since he was a member of the board that hired Page eight years ago. He thanked Page for "exceptional service to the school district and to education" and said he has been "an invaluable resource" to the district.

Hendren particularly praised Page for his work in improving the school's program for career education. He said Page's hard work resulted in the building of new facilities and in the creation of the Western Benton County Career Center. "It is citizens like you who build strong, cohesive communities," Hendren said. "You make a difference in a lot of kids' lives."

Page expressed his appreciation to the school board, his staff and the community. He said he felt very supported all through his stay in Gravette and said his staff always handled issues in the best way possible. He told board members he did not feel any accomplishments made during his tenure were his to claim. "We did it," he said. He said he had enjoyed his stay in the Gravette district but was "looking forward to wrapping it up" so he could spend more time with his wife Pam "who has waited on me to spend time with her for 42 years."

Page began by leading the pledge of allegiance to the flag to open the meeting.

Dennis Kurczek, business manager, gave the April financial report. He reported $284,000 in property tax revenue had been received during the month and a little over $31,000 in pre-K tuition, "a little shy" because of the early school closing. He reported $11.9 million has been paid out in construction funds. He said staff has been paid in full, including stipends, during the school closing and said there have been some unexpected tech outlays because of the pandemic but the district hopes to get reimbursement through the CARES Act.

Kurczek said he expects diesel and electric bills to be lower this month and Richard Carver, maintenance department supervisor, said he has placed utilities in all buildings on unoccupied mode and hopes to upgrade the Glenn Duffy Elementary HVAC system with the savings that will make possible.

Board members voted to accept the resignation of Kathryn Scott, middle school paraprofessional, who is retiring and moving out of the district, and Taylor Lewis, middle school math teacher, who is moving to take a position in another school. They also approved adding a track stipend of $1,269 for Sheldon McKenzie.

Superintendent Page reported on a recent virtual staff meeting in which retirees from the district were honored and several awards were given. He expressed thanks to all faculty and staff members and said T-shirts had been given to all teachers. He announced that all teachers and classified staff members will be recognized as 2019-2020 Teachers and Classified Staff (Employees) of the Year.

Clay McGill, principal architect with BiLD Architects, joined the meeting remotely and gave a facilities report. He said "great progress" was being made on the new high school gymnasium and workers are wrapping up sidewalks and getting ready for some additional site work and paving. He said he hopes to complete all needed items on the interior in June, then in July complete all exterior work. Robert Adams, with Crossland Construction, experienced technical difficulties and was unable to report but sent updated information to be shared with each board member.

Board members considered changes in school board policies. One dealt with a reduction in force, with the last one on being the first one off in a matter of staff reduction, giving those with tenure precedence. Superintendent Page said all board members had been sent copies of the policies and most changes are just changes in wording to increase clarity. Policies are pretty standard throughout the state, he said. Board members voted unanimously to approve the 2020-2021 policies as presented.

Board members voted to accept the school choice report as presented and Superintendent Page pointed out that the special ed program is already at maximum capacity.

Board members voted to accept the low bid of $24,000 from Dojan Inc. of Missouri for refinishing the floor at the competition gym to get it ready for volleyball season. Custodial department supervisor Richard Carver said the work will begin June 1 and the project should be completed by mid-June. He said standards would be moved to allow space for two practice courts on the gym floor. Funds will come from the building fund.

Also approved were cameras and access points for the new gym. Board members approved the recommendation of Daniel Rice, technology director, to accept the bid of $40,548 from Triple S Alarm for purchase, installation and configuration of cameras and the bid of $30,682.86 from NextStep Innovation for access points to provide wireless hookup. Also approved was a bid of $19,315.80 for TVs for the new gym, so a game can be watched at several locations within the facility. These are the same TVs which are used for instruction in the school's classrooms. All votes were unanimous.

Board members voted to table a vote on providing a dark tint on windows at the gym's hospitality room and agreed they would like to wait a while and see how the windows work without tint. Cost of the window tint would be $5,783.79 and both McGill and Carver said that it could be added at a later date.

Shannon Mitchell, high school principal, joined the meeting remotely and reported she sees no feasible date for a senior prom. She asked the board members to look at the calendar and try to determine a date for graduation as she has several parents wanting to have a set date for planning. Several board members spoke up and said that input they had received from parents of graduates indicates that all would prefer having an in-person graduation. Hope Duke said she would definitely want parents to be able to attend and made a motion to set a graduation date for June 27 with a backup date for July 11 if restrictions are not lifted by the June date. After some discussion, board members voted to set Saturday, July 11, as the date for graduation, subject to guidelines set by the State Department of Education.

Board members voted to approve an online summer school session for the first four weeks of June. High school principal Shannon Mitchell will set guidelines and supervise the session.