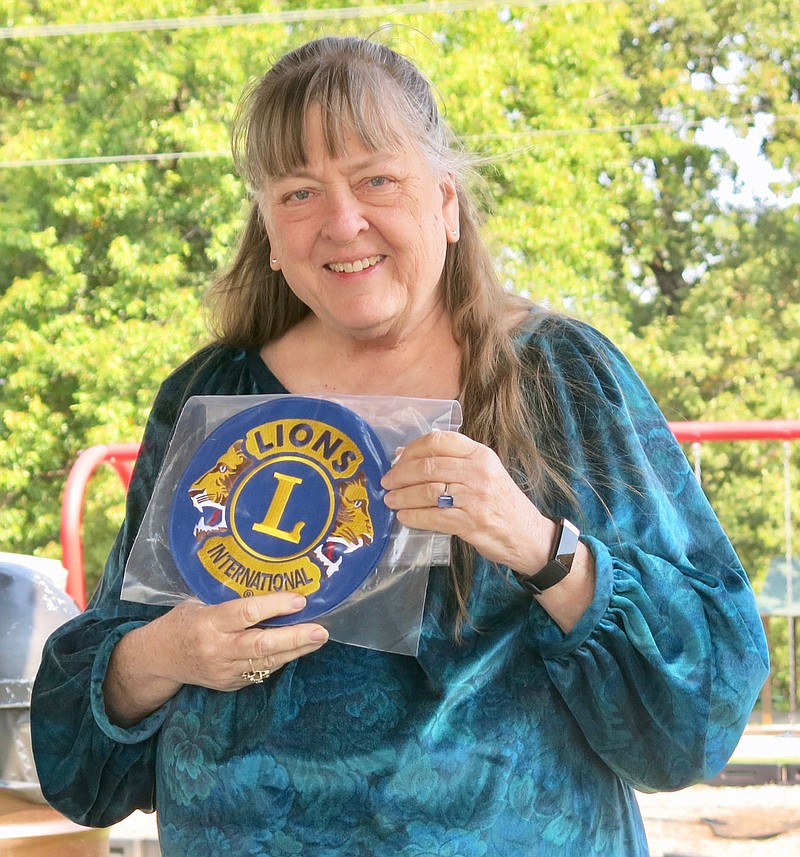 Westside Eagle Observer/SUSAN HOLLAND Linda Damron, president of the Gravette Lions Club, displays the Lions Club emblem she recently received. The Lions Club has purchased a bench, to be installed on the back deck at the Gravette Public Library, and the patch will be attached to the umbrella which will shade the bench. The bench will provide a convenient place for patrons to read outdoors when the weather is good.

Minutes of the Sept. 15 meeting were approved. Club secretary Al Blair reported for treasurer Jeff Davis who was unable to attend and said the packages of pecans the club ordered have arrived and they are being sold at the Hair House beauty shop on Second Avenue S.E. They are also available at the Saturday farmers market. Blair also reported eye testing of pre-K and kindergarten students was being conducted at Glenn Duffy Elementary School that morning and again on Wednesday morning.

Vice-president Cela Gaytan reported materials for the annual Peace Poster contest were received and have been placed with art teacher Kolbie Kesterson. Art students are working on the project.

President Damron led a discussion about her proposed membership drive and members voted to authorize treasurer Davis to print membership brochures to distribute to prospective members.

An announcement was made that Dr. Nancy Jones is requesting that knitted and crocheted hats for children at Arkansas Children's Hospital be submitted by Oct. 31. The club had earlier made a $50 donation to buy supplies for making the hats and some members are working on them.

Upcoming events for the club include fall cleanup at Hillcrest Cemetery and the annual White Cane Day.

The next meeting, another Zoom meeting, will be at 12 noon on Tuesday, Oct. 20. Prospective members and guests are always welcome. Anyone interested in joining the Lions for the Zoom meeting should contact Lion Jeff Davis, 479-787-1068.