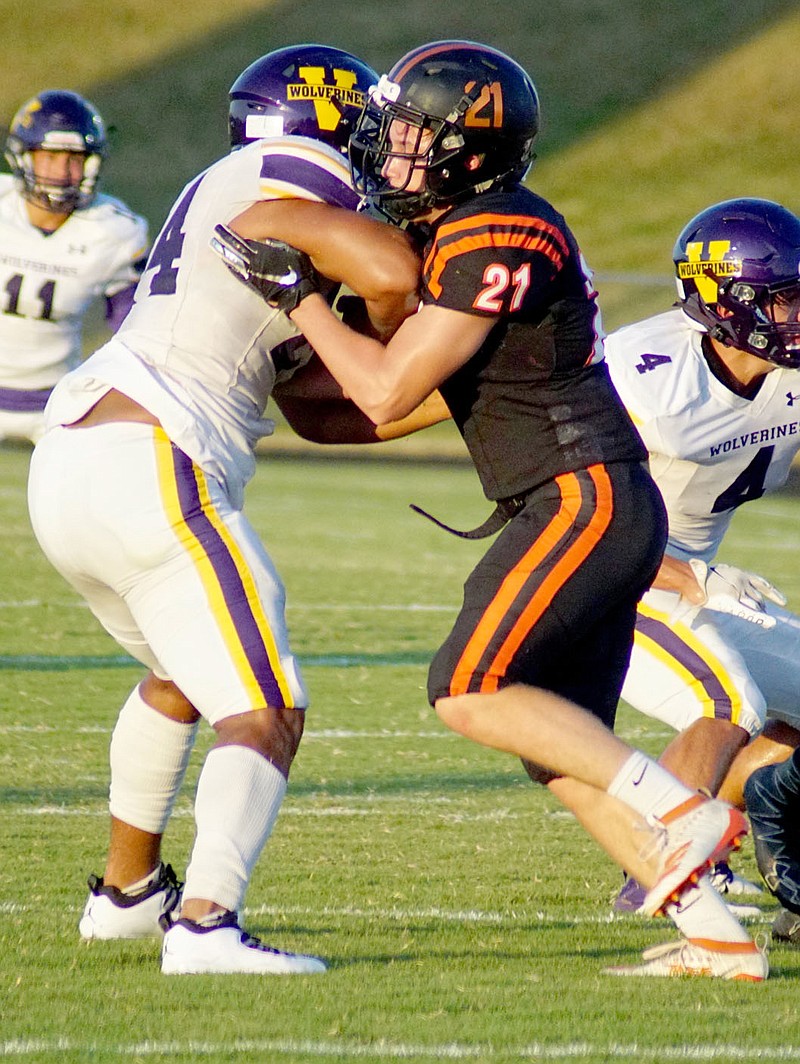 Westside Eagle Observer file photo/RANDY MOLL Shown playing defense against the Vian, Okla., Wolverines on Aug. 28, Gravette sophomore Karl Bontragerâ€™s (No. 21) second-quarter touchdown run put Gravette ahead to stay as the Lions held off Inola for a road non-conference victory. Bontrager scored from 8 yards out, then added the two-point conversion run to give Gravette (1-1) a 16-13 lead in play Sept. 4, at Inola. Against Pryor, Okla, on Friday, Bontrager set up a touchdown for Gravette with a 30-yard run. Later, he carried the ball across the goal again for another Gravette score.

WESTSIDE -- The Lions fell behind early and were never able to catch up as Gravette hit the road Friday night, taking on the Tigers in Pryor, Okla. But the Lions never gave up as the team scratched and clawed its way throughout the 48-minute game, losing by 28.

Pryor kicked off the first few minutes of the first quarter, scoring two touchdowns and a pair of conversions to lead the Lions by 16. But on a series late in the quarter, a handoff from quarterback Cy Hilger to Karl Bontrager yielded the Lions a 30-yard gain. With the ball on the Tigers' 17-yard line, Hilger found the end zone on a quarterback keeper for a 17-yard touchdown run. The conversion attempt was good, cutting the Tigers' lead to eight.

A few minutes into the second quarter, the Tigers went on a rampage and managed to get three touchdowns and a conversion and a lead over Gravette of 44-8. But the Lions roared into action once again when Hilger broke free from a pair of tackles near the Lion 49 yard line and managed a short pass to Cordell Donner, who ran 44 yards, setting up a touchdown run by Bontrager on the next play. The Lions' conversion attempt failed, cutting Pryor's lead to 30.

Pryor extended its lead by 10 early in the third quarter. Later in the quarter a handoff from Hilger to Bontrager resulted in a 24 yard gain for the Lions. With the ball on the nine yard line, Hilger handed off to Trenton Durham who took it into the end zone for Gravette's third touchdown of the night. The conversion attempt failed, making it a 54-20 Pryor contest.

In what would be the final touchdown of the game, Lion defensive end Ryder Brown leaped into the air and pulled down an intercepted pass from the Tiger quarterback at the Gravette 20 yard line and ran the ball into the end zone. The two-point conversion failed, cutting the Pryor lead to 28.

When the final buzzer sounded, ending the 48-minute contest, the Pryor Tigers claimed the victory, 54-26, over the Gravette Lions.

The Lions managed 273 total yards -- 89 passing and 184 rushing -- to the Tigers' 455 -- 193 passing and 262 rushing. The Lions managed five of 11 third-down conversions to the Tigers' four of nine. Gravette turned the ball over two times and had one interception. Pryor turned the ball over once and had only one interception on the night.

Gravette continues on the road Sept. 25 for a 7 p.m. contest with the Elks in Elkins.