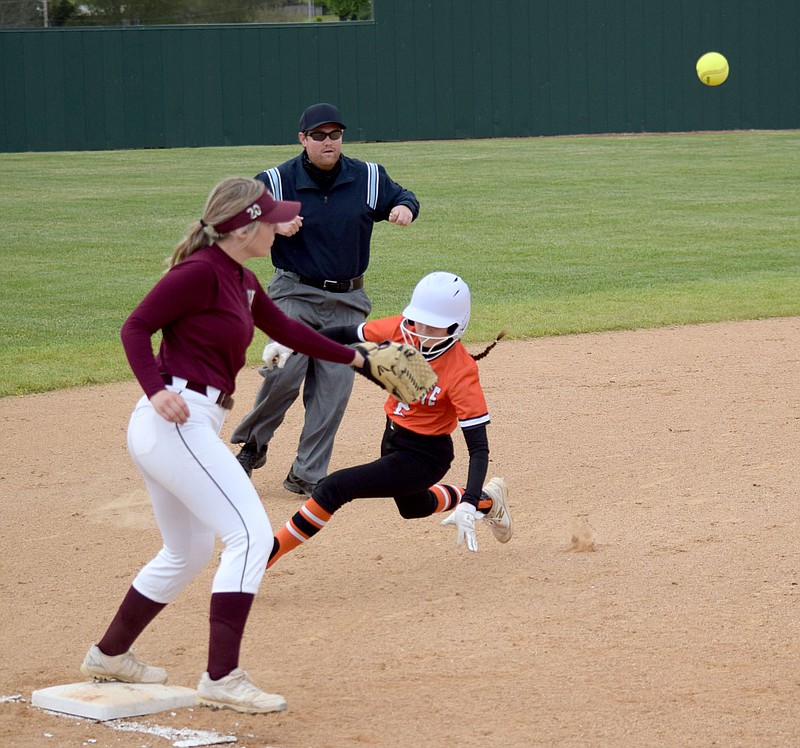 Westside Eagle Observer/MIKE ECKELS Which arrived at third base first, the runner or the ball? After a teammate hit a ground ball to right field, Brynn Romine (right) started to slide into third base just as the ball entered the picture from first base during the Thursday night Gravette-Huntsville softball game in Gravette. Romine got to the base before the ball arrived in the glove of the Lady Eagle player.

GRAVETTE -- In the final week of the regular season, the Gravette Lady Lions faced the powerful Prairie Grove Lady Tigers softball team in a contest played at Prairie Grove on April 19. The contest came down to how the Gravette girls would perform in their final at-bats.

Gravette, down 7-4 after five innings, managed a pair of runs in the top of the sixth inning to pull within a single run of the Lady Tigers. There was hope for a seventh-inning rally and a win, but strong fielding by the Lady Tigers kept the Lady Lions at bay and gave Prairie Grove a 7-6 conference win over Gravette in six and a half innings of play.

Brynne Romine managed two runs on three hits for the night, with Keeley Elsea, Taylor Neustel, Brooke Handle and Trinity Burnett having one run each.

Brooke Handle was in the circle for the Lady Lions, completing six innings and throwing 98 pitches. Handle allowed seven runs on 13 hits, including a homer (six earned runs) while walking three and striking out one.

It was a completely different story Thursday night when Gravette returned to their home field to take on the Lady Eagles of Huntsville in the final scheduled home game of the 2021 season.

Gravette jumped out in front of Huntsville with a run in the first, eight in the second, two in the third and one more in the fourth to put the game away, 12-0, over the Lady Eagles.

Handle was in the circle once again, pitching a shutout game. She completing five innings, throwing 51 pitches, and allowed only three hits and no runs, while striking out eight.

Paige Greer led the Lady Lions with three runs, followed by Lizzy Ellis and Romine, each with two. Elsea, Neustel, Handle, Taylor Snow and Burnett rounded out the scoring effort with one run each.

The Lady Lions begin their quest for a state playoff berth with the 4A Region 1 district tournament April 27-30 at a place to be determined. 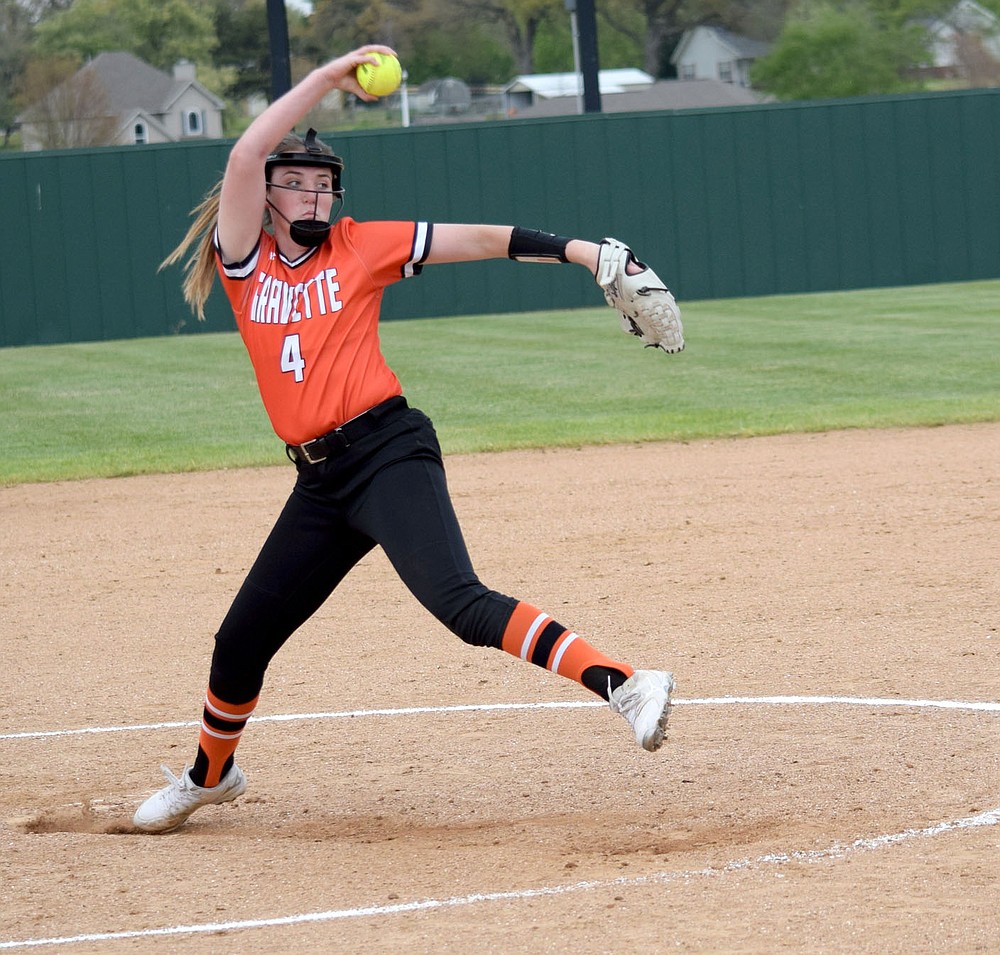 Westside Eagle Observer/MIKE ECKELS Give me a C, give me an E! Brooke Handle's windup into her delivery looks like she is trying to spell out a word but her unique style delivered a strike over home plate during the third inning of the Gravette-Huntsville conference game in Gravette Thursday night. Handle pitched the entire six inning game, throwing a total of 98 times. 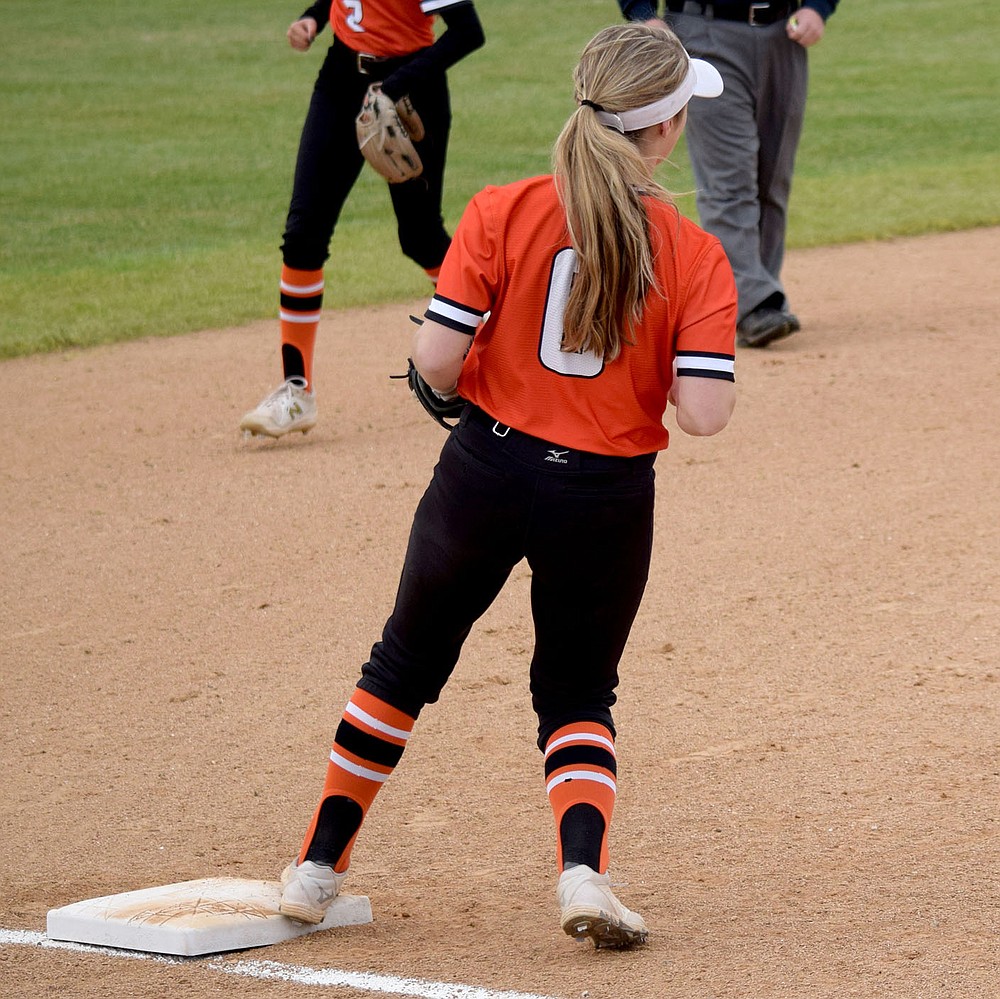 Westside Eagle Observer/MIKE ECKELS After fielding a ground ball near the pitcher's mound, Lady Lion Lizzy Ellis touches third base for a Lady Eagle out during the Thursday night Gravette-Huntsville conference softball matchup in Gravette. Ellis' effort resulted in the second out in the top of the fourth inning which put the Lady Lions firmly in the lead 11-0. 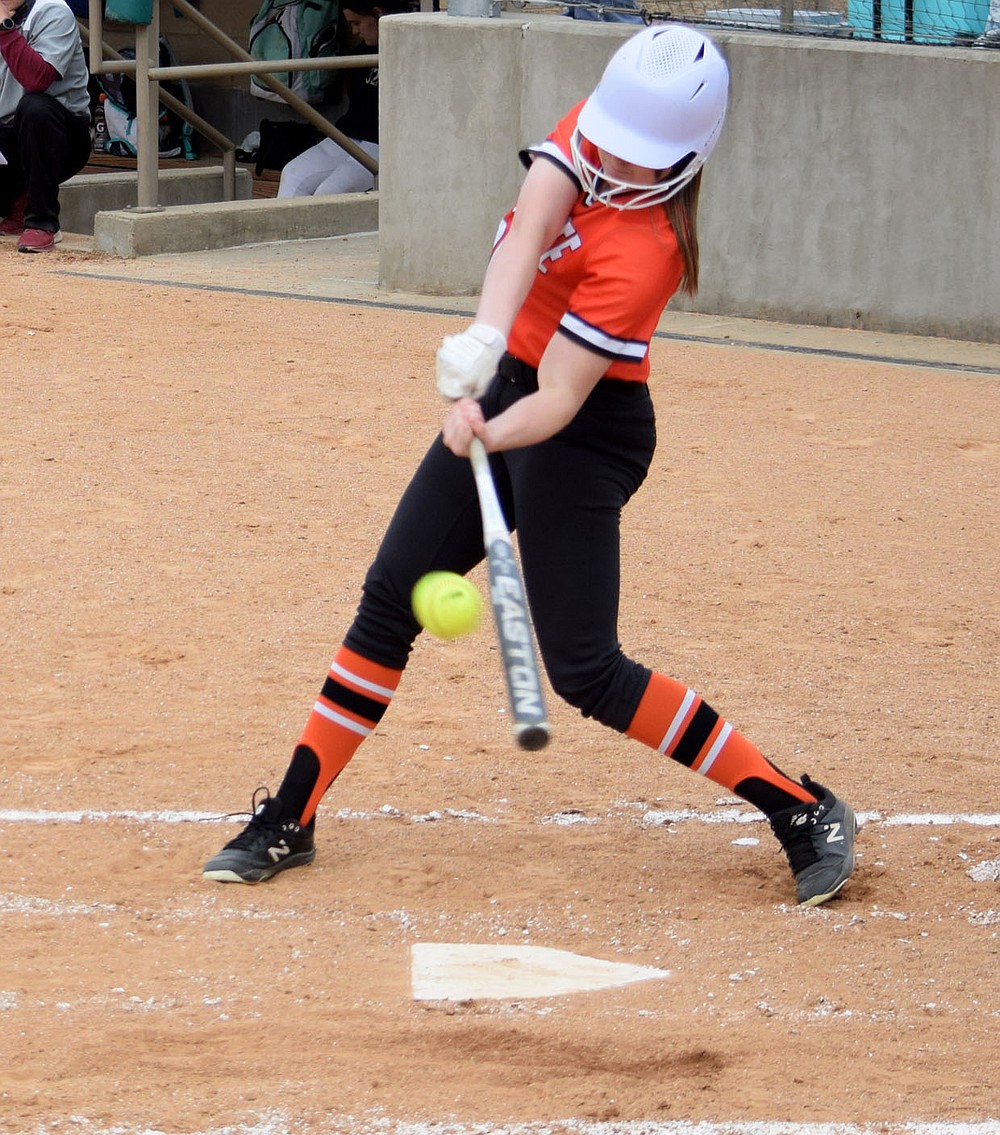 Westside Eagle Observer/MIKE ECKELS Keeley Elsea makes contact with the softball, sending it deep into the outfield for a double during the Thursday night Gravette-Huntsville softball game at Lion softball field in Gravette. Elsea drove home two runs on this play.
ADVERTISEMENT