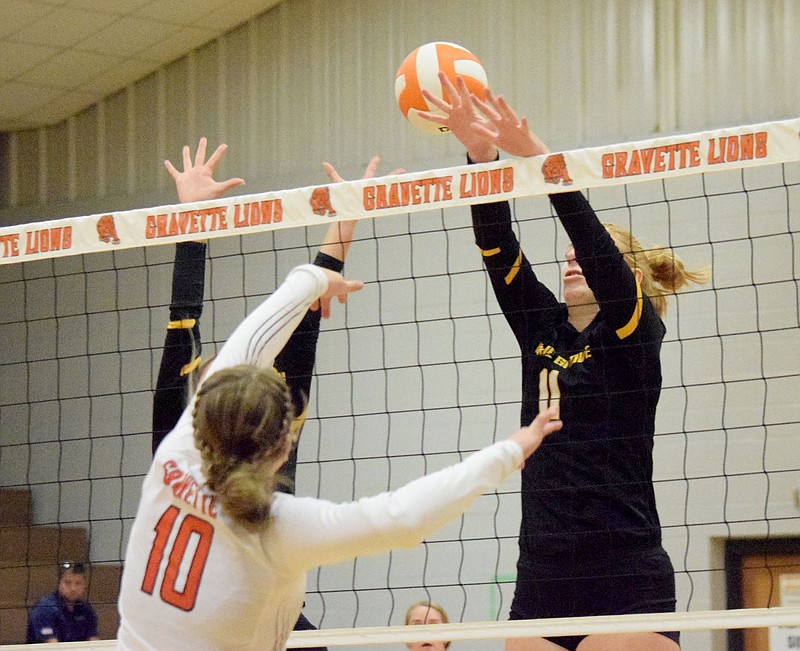 GRAVETTE -- The Lady Lions were back in their new home at the competition gym in Gravette Thursday night for a match against the Prairie Grove Lady Tigers for jersey night. Lady Lion fans had plenty to cheer about as Gravette overwhelmed the Lady Tigers in three straight sets for their second victory of the new season.

Since it was jersey night, fans were encouraged to wear their favorite team jerseys. A few fans did participate in the event, but the student section behind the Gravette bench took the prize for the night. Of course, there were Arkansas Razorback jerseys. But the vast major of shirts were either professional football or basketball team jerseys. It certainly was a contrast from the sea of orange and black that usually encompasses this section. A nice departure from the norm.

One of the new features of the competition gym is the new scoreboard. The main scoreboard, which now hangs over the windows near the visitors' benches, is built specifically for volleyball matches. Some of the features exclusive to this scoreboard include the number of sets won, the scores of each previous set, timeouts left, and the current set number. All this is designed to make it easy for the coaches, officials and fans to follow as the match progresses.

The Lady Lions hit the court running as Gravette jumped out to an 8-0 lead, forcing the Lady Tigers to take a timeout to regroup and make changes to their game plan. Prairie Grove's strategy worked and they finally got a point on the board. But the Lady Tiger plan soon fell apart and the Lady Lions jumped out in front, 14-2.

A few good saves by the Prairie Grove front line brought the Lady Tigers back into the match. But the Lady Lions kicked up the intensity and eventually took the first set, 25-8.

The Lady Lions travel to Huntsville on Aug. 31 (after press deadlines) to take on the Lady Eagles in a four-team contest beginning with the seventh-grade team and followed by the junior high, junior varsity and varsity games. Gravette returns to the competition gym on Sept. 2 for a four-game series with the Shiloh Christian Lady Saints. That series is slated to begin at 4 p.m. with the seventh-grade team and will include the eighth grade, junior varsity and varsity teams. 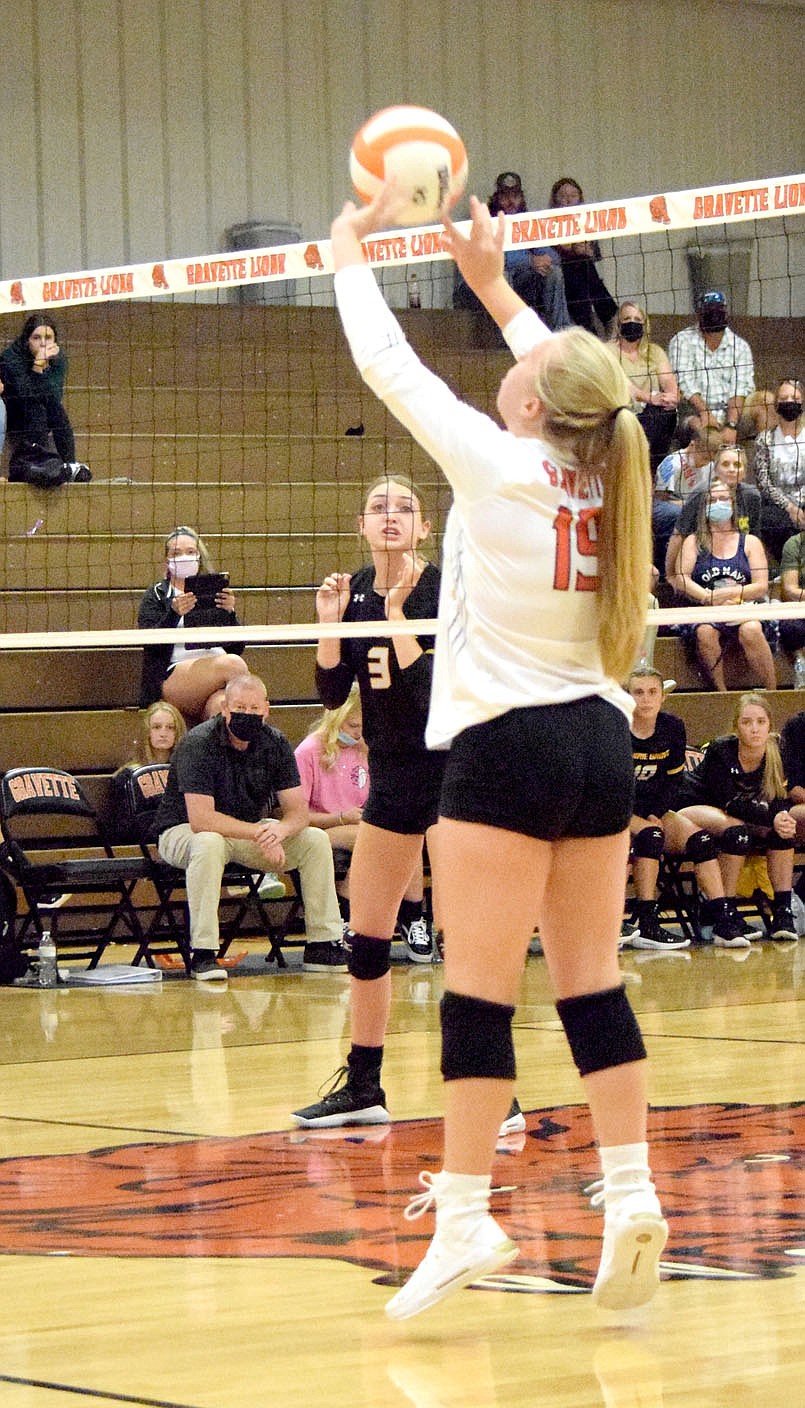 Westside Eagle Observer/MIKE ECKELS Paige Greer (19) passes the ball to a teammate setting up a hit back into Lady Tiger territory during the Thursday night Gravette-Prairie Grove varsity volleyball match at the Competition Gym in Gravette. 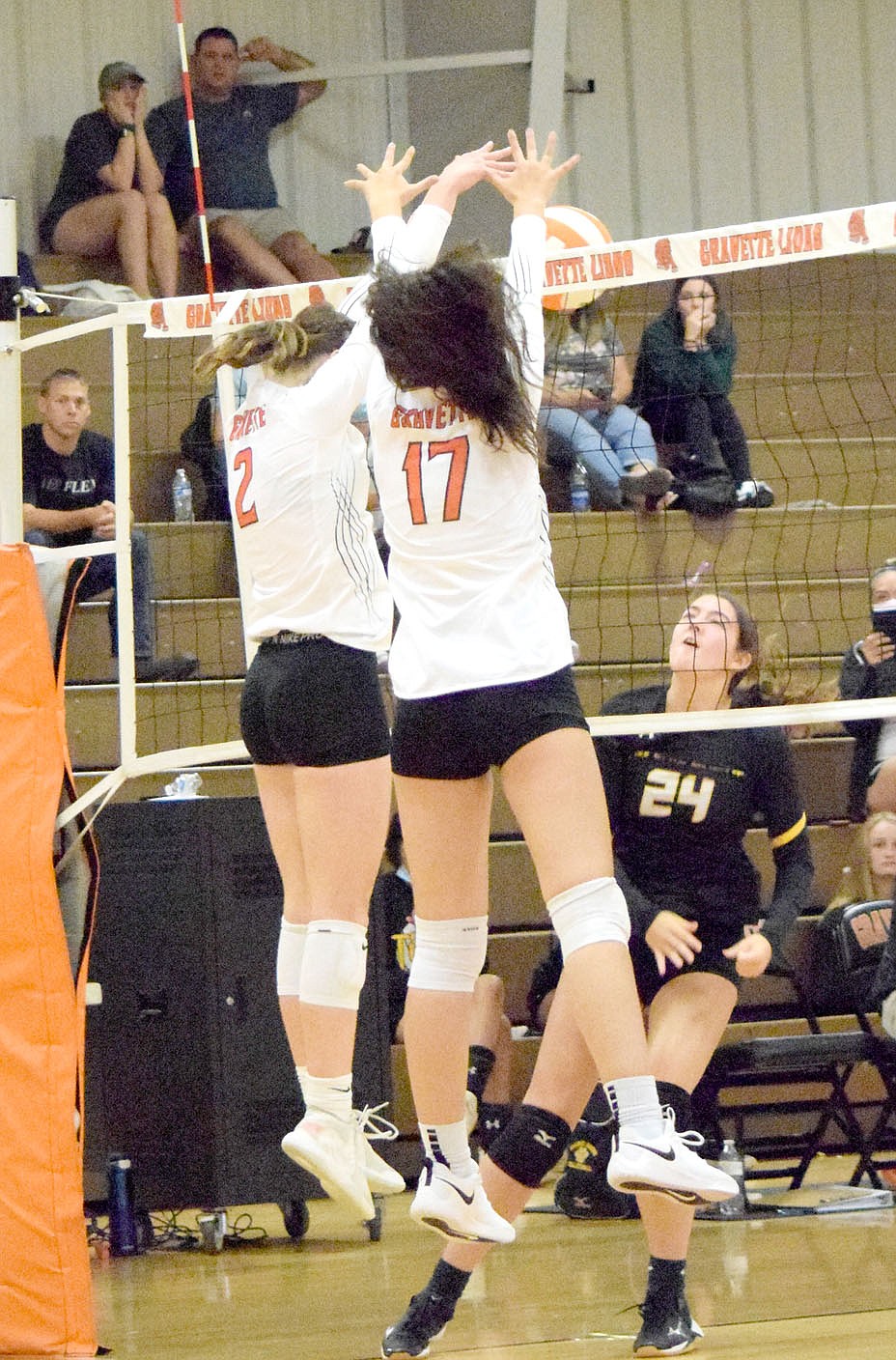 Westside Eagle Observer/MIKE ECKELS Working together, Lady Lion Abby Smith (2) and Ella Pinches (17) deflect the ball back over the net into Lady Tiger territory during the second set of the Gravette-Prairie Grove varsity match at the Competition Gym in Gravette Thursday night. The Lady Lions took its second win of the 2021 season in three straight sets over the Lady Tigers.