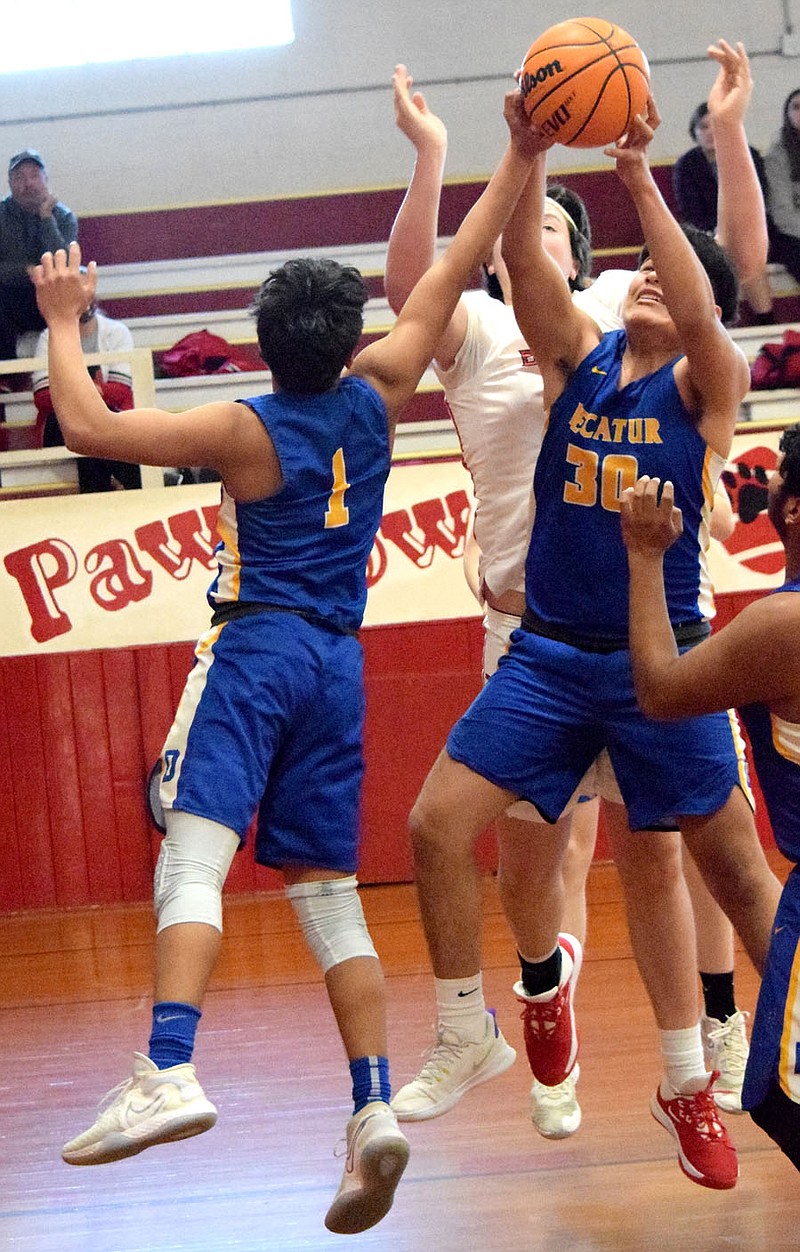 Westside Eagle Observer/MIKE ECKELS Bulldog Enrique Rubi (1) tries to push a rebound ball further into the hands of team mate Edgar Herrera (30) during the third quarter of Friday afternoon's Flippin-Decatur district contest at the middle school gym in Flippin. Rubi's help allowed Herrera to get a better grip on the ball which in turn earn a field goal for Decatur.

FLIPPIN -- Playing in what would be their final basketball game of their high school career, Bryson Funk, Carlos Hernandez, Trevor Girdner and Kevin Garcia, along with and the Decatur Bulldogs boys' basketball made the three-hour, 130-mile trip to Flippin to play in a modified district contest. From the opening tipoff, it became apparent that it was the Bobcats' night to shine.

Playing at the middle school gym in Flippin Friday night, Decatur had a chance to make the regional tournament with a win over the Bobcats. With the week-long extreme winter weather, the Arkansas Activities Association came down with a ruling that any 2A district tournaments would have to be completed by Feb. 20 at individual locations.

From the opening tipoff, the Bobcats' big man, 6-foot, 7-inch senior Dale Smyer, would dominate the contest on both offense and defense, stripping away several Bulldog scoring opportunities and turning them into scoring plays for Flippin.

A minute into the first quarter, Smyer connected on a layup for the first field goal of the contest. He was fouled on the play, sending him to the free-throw line for one shot. Smyer made the shot and the Bobcats were on the scoreboard, leading by three.

The Flippin Bobcats continued to dominate the remaining three quarters, eventually taking the win, 82-23, over the Decatur Bulldogs to advance to the 2A North Regional Tournament.

In a unique scoring situation for the Decatur Bulldogs, Girdner, Herrera, Enrique Rubi, Christian Ramirez and Ben Watkins all were leading scorers with four-points each, followed by Funk with three.

On the Flippin Bobcat side, Smyer led the scoring with 21 points, followed by Paul Hart with 12, Reed Thomas with 11. Other Bobcats contributing to the scoring effort were Devyn Payne and Preston Bolding, each with six, Evan Riggs with five, Gage Halen, Christian Halay, Jorden Aldridge and Gabe Davis, all with four each, Corbin Phillips with three, Kole Rogers and Bryan Benedict with two each.

In the locker room after the game, Dayton Shaw reflected on his first season as a head basketball coach by first thanking his four seniors.

"Let's give the seniors a big round of applause," Shaw began. "I want to thank all of you for making my first season as a head coach a very memorable experience. We have a lot of work moving forward, but I am confident that we will come back a stronger team next season." 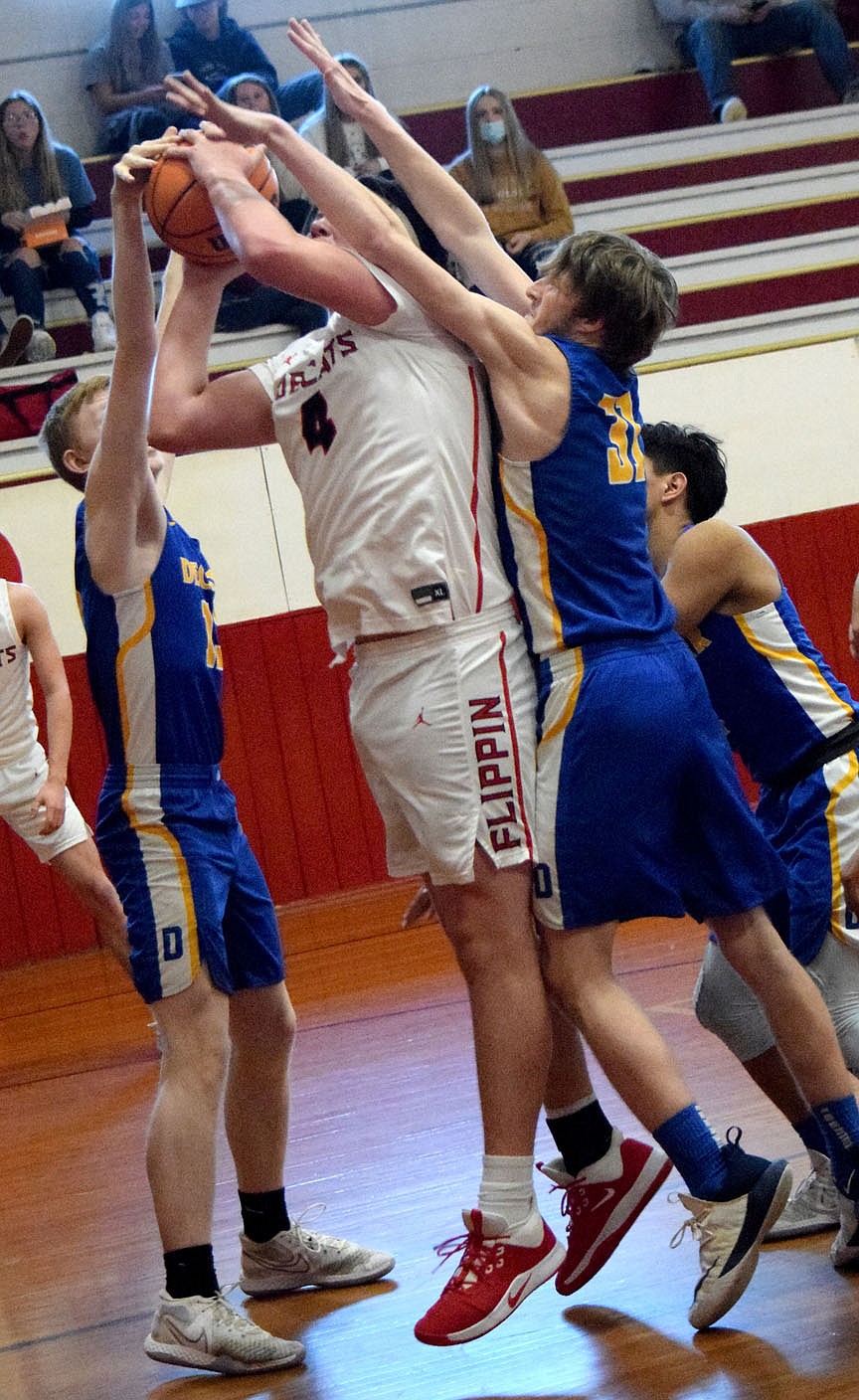 Westside Eagle Observer/MIKE ECKELS A pack of Bulldogs consisting of Deegan Brooks (left), Trevor Girdner (31) and Enrique Rubi (right) each try to strip the ball away from Bobcat Dale Smyer (4) during the second quarter of the Flippin-Decatur district contest in Flippin Friday afternoon. In spite of the mass attack by the Bulldogs, Smyer managed to put the ball up and into the basket for two of his 21 points for the night. 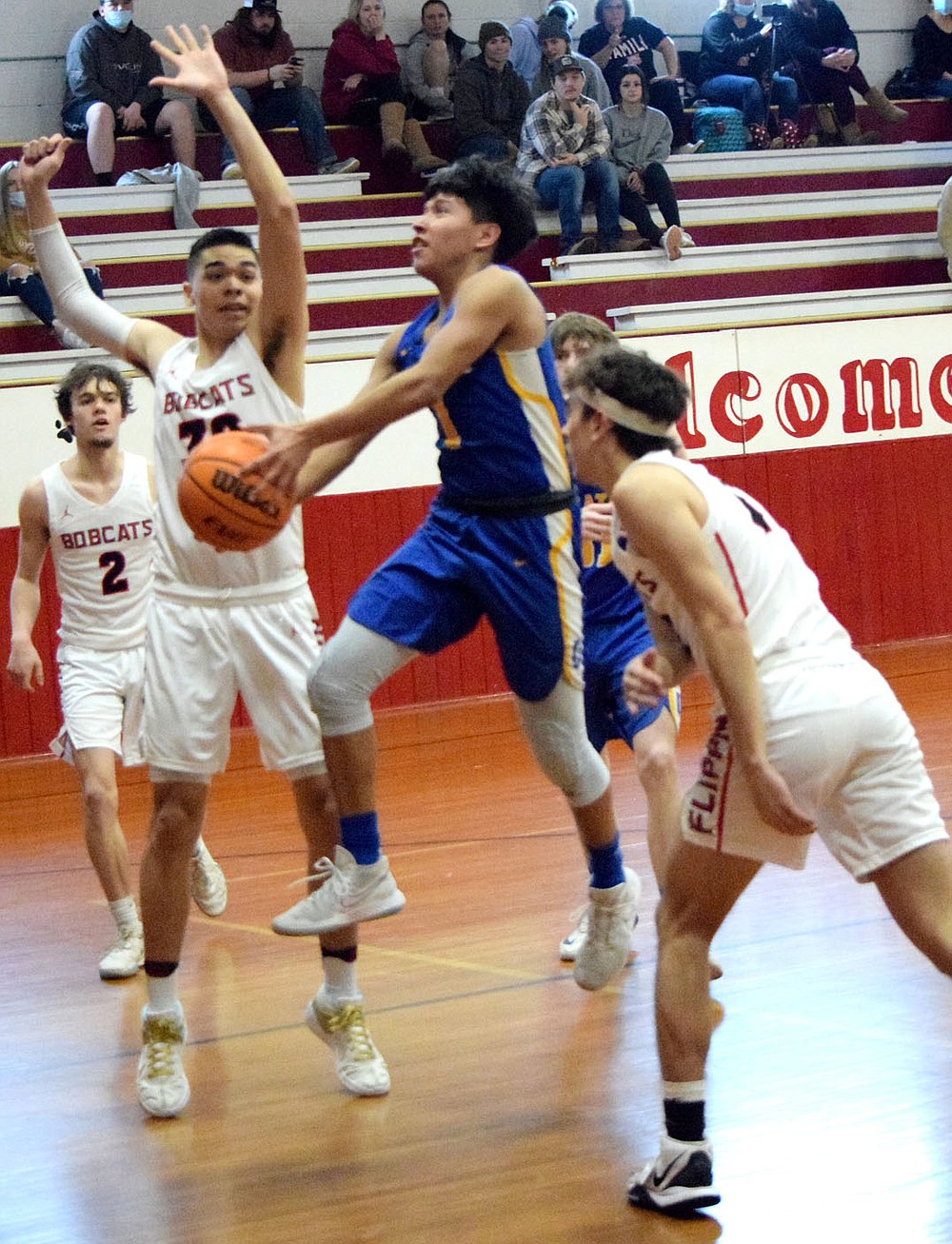 Westside Eagle Observer/MIKE ECKELS With a pack of Bobcats surrounding him, Bulldog Enrique Rubi (1, center) goes high for a layup late in the third quarter of the Flippin-Decatur boys district contest at the middle school gym in Flippin Friday afternoon. The Flippin Bobcats took the win 82-23 over the Decatur Bulldogs to advance to the 2A Regional Tournament. 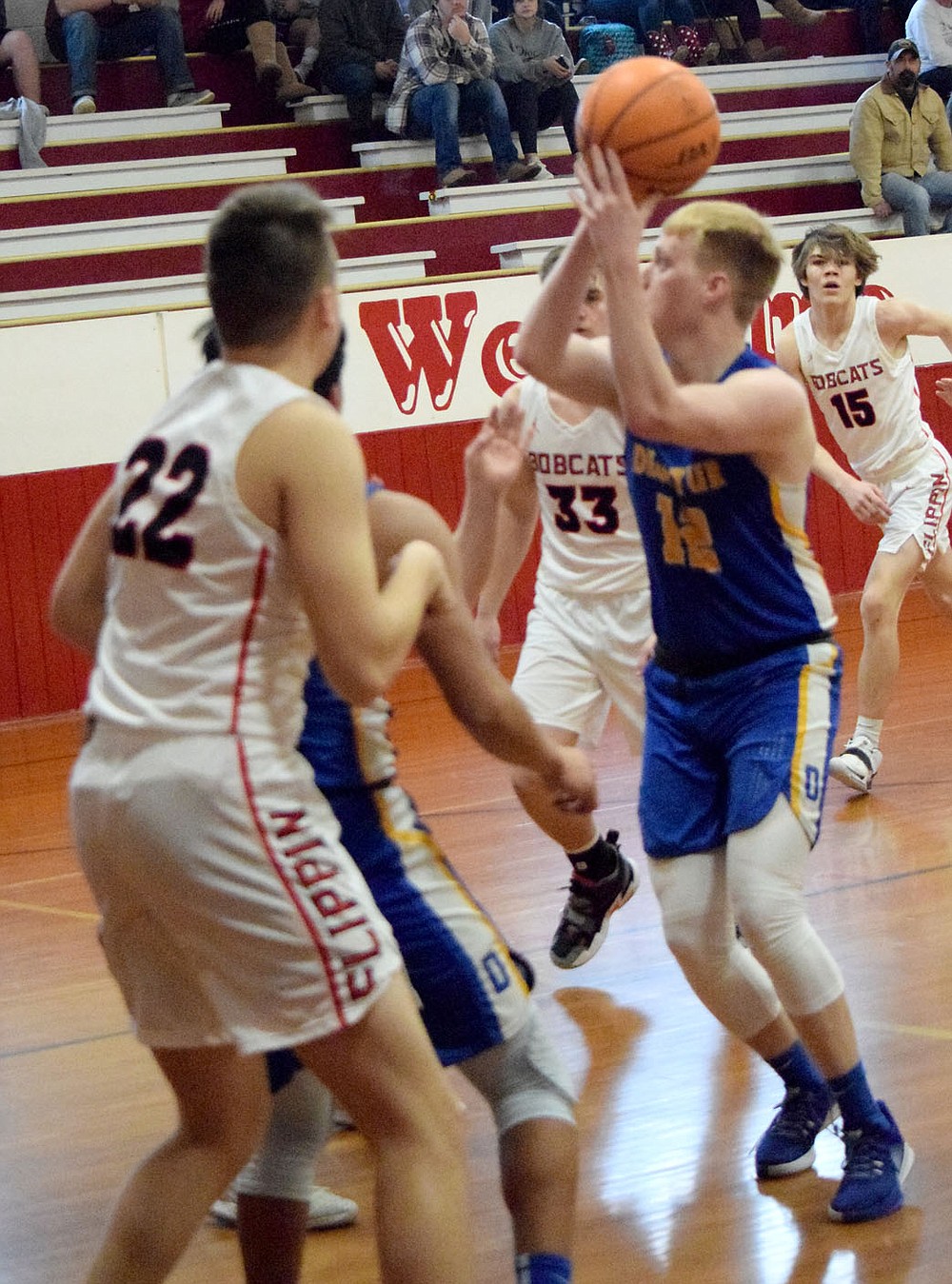 Westside Eagle Observer/MIKE ECKELS Bryson Funk (12, right) puts up a jumper from the top of the key during the Flippin-Decatur district matchup at the middle school gym in Flippin. Funk played his final basketball game as a Bulldog Friday afternoon. His basketball career began as a player on the 15-16 7th grade team under John Unger. 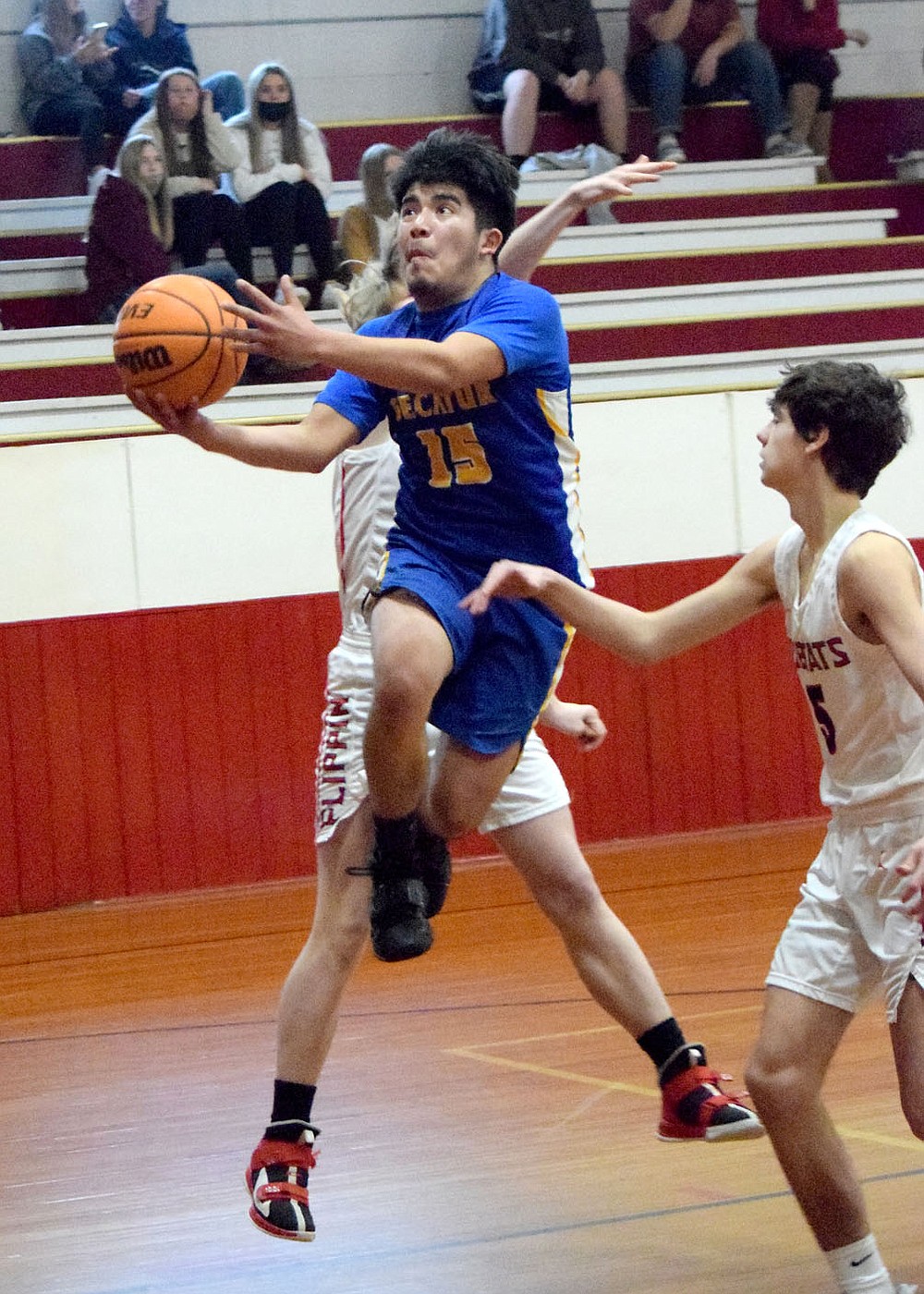 Westside Eagle Observer/MIKE ECKELS Bulldog Christian Ramirez (15) takes off between a pair of Bobcat defenders on his way to the basket Friday afternoon during the fourth quarter of the Flippin-Decatur district boys basketball contest at the middle school gym in Flippin. The Bulldogs ended its 2020-21 basketball season with a loss to the Bobcats 82-23.