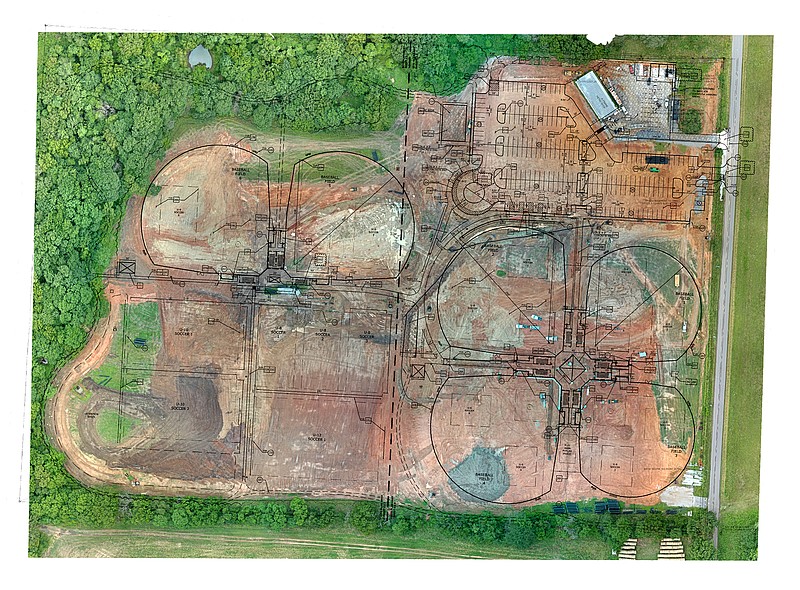 Submited/FLINTCO An aerial image with overlay shows the progress on the sports complex being built on Browning Road as of July 12. The work is being completed by FLINTCO.

GENTRY -- The city council in Gentry, on July 12, heard numerous updates and passed an ordinance on two of its three readings to amend Gentry's code to allow for virtual attendance at council meetings.

With rules suspended, the council passed two readings of an ordinance to amend city code and allow virtual attendance at council meetings even in times when there is no emergency declaration of the governor, the county judge or the mayor in effect. The change would allow council members to attend meetings remotely as long as 60 percent of the members were present in person to meet state code requirements for public meetings.

Council member Michael Crawford said he saw no need to pass the measure on three readings with a single vote, but council member Cindy Philpott and other members expressed concern that the council should have something in place should the covid-19 pandemic spike when school resumes in the fall. As a result, council member Jason Barrett moved to pass the measure on two readings with a single vote and consider the third reading at the August meeting. The motion passed unanimously, with the exception of Dan Erskin and Jimmy Thorburn who were absent.

The measure was brought before the council because of the covid-19 pandemic and lingering outbreaks of the viral disease, making virtual attendance preferable should the mayor, the city clerk or a council member or citizen be exposed to the disease. Virtual attendance also opens up the possibility for Gentry residents to listen to the meeting virtually if they desire.

Mayor Kevin Johnston updated the council on the progress of the splash pad, the sports complex and the water storage facility by bringing in representatives from the firms building or designing the structures.

Although rain has delayed construction of the splash pad in the city park, it was reported that utilities were being installed last week, the sea walls were almost complete and cement would be poured this week. Johnston said Gentry's splash pad is the fourth largest one built by RJR Enterprises, the construction firm. It was estimated the facility would be complete and ready to open by Aug. 1.

Justin Spafford of Flintco estimated the sports complex project would be completed by late fall. He said electrical and plumbing work was being completed and that the irrigation system was about to be installed.

Larry Gregory of Garver Engineering said the water tank was being welded together on the ground for Gentry's new water tower along Y-City Road. Once the tank is complete, in five or six weeks, it will be raised up and then painted. He said the water tower was scheduled to be complete in the middle of 2022.

Johnston told the council the 60 days granted to the property owner at 117 N. Smith Ave. had passed, but the owner had applied for and received a demolition permit and the building would likely be demolished within the week. He also said the demolition of the condemned property at 119 N. Nelson was scheduled for this week.

Johnston told the council that the city now expected to receive more than $800,000 in American Rescue Plan Act funding, but the funds need to be spent on infrastructure needs related to water, sewer and broadband. He said the money received by the city had to be obligated by the end of 2024 and spent by 2027. Johnston suggested the city use the funds toward a new wastewater treatment plant and needed sewer system repairs. He said the city has contracted Garver Engineering to study the city's needs and prepare a plan. He asked the council to let him proceed with study and planning so that the city was in a good position to move forward with a plan and use the funds by the deadlines included in the act. He anticipated the need to be ready with plans since many cities will be doing similar projects and needing similar supplies and contractors.

Also reported to the council was the Simmons Foods pledge to sponsor a Gentry park project in the amount of $500,00, which would be given to the city over five years. In exchange, Simmons requested naming rights for the facilities it sponsors. He said Simmons was interested in sponsoring a project already underway and had expressed interest in sponsoring the splash pad or a soccer field at the sports complex.

Johnston explained that the city's bonds did not allow bond money to be used to benefit an individual or a business, so it would probably be necessary for any money given by Simmons to fully fund a project or a specific part of it before naming rights could be granted, but Johnston did not see that as being an issue since there were many parts of the park master plan currently not funded with bond money.

In a related issue, Johnston said the city could obtain a five-year short-term loan for the full amount of the Simmons pledge and complete a park project and then pay back the loan as the money was received from Simmons. He asked for the council's thoughts on that before seeking more loan information. Council member Jason Williams said he would prefer to see more information on incoming tax revenue designated for parks and look at the city budget before giving the go-ahead on obtaining a loan. He expressed concerns that things could change in five years and the money not be available to repay the loan.

Williams also said there are other parts of the park master plan that could be sponsored if the city can't use the splash pad because of bond money being used for the project. Johnston said the city still is $2 million short of completing the items in the park master plan.

Janie Parks, executive director of the Gentry Chamber of Commerce, reported on the great successes of the June fishing derby and the July 3 Freedom Festival. She expressed her gratitude to the business sponsors and all who volunteered and worked to make the events go off smoothly. She said the events could not have happened without all the support from local businesses.