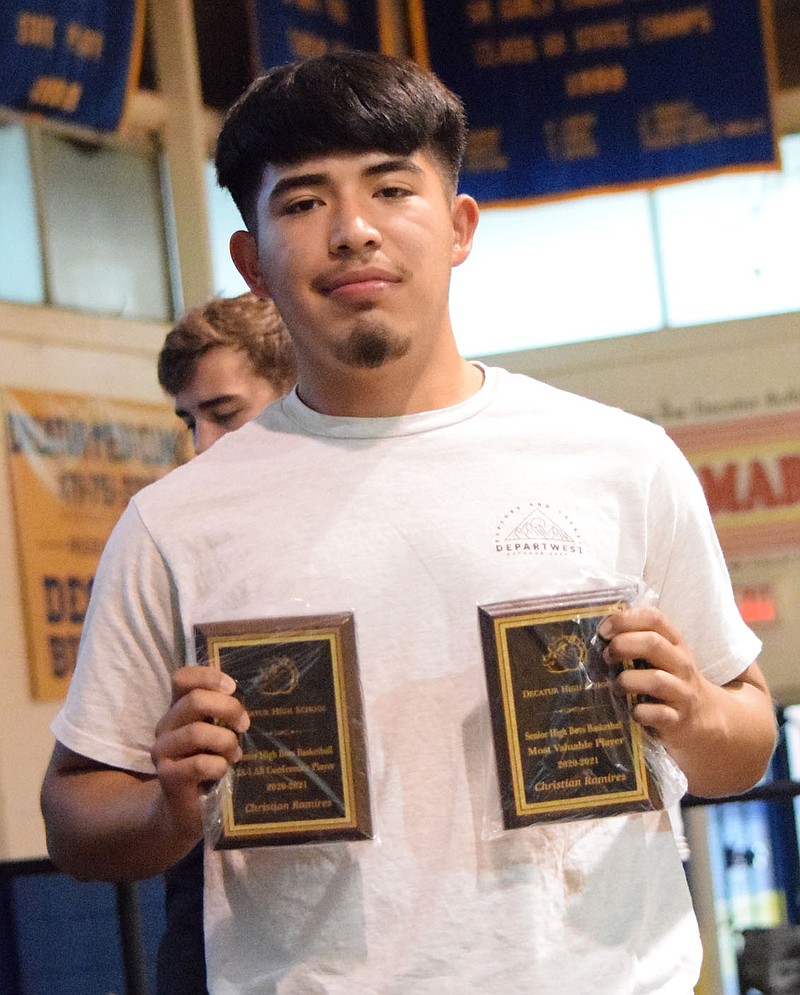 Westside Eagle Observer/MIKE ECKELS Christian Ramirez displays a pair of basketball awards, 2A-1 All Conference (left) and the Most Valuable Player. he received during the 2021 Bulldog Sports Award program in Decatur May 18. Ramirez was recently name to the 3A All State Soccer team as was the Bulldogs fifth leading scorer with five goals this season.

DECATUR -- The Decatur Bulldog soccer team had a stellar 2021 season, one of the best in several years. Three Bulldog players earned distinction in the 3A state tournament at Burns Park in North Little Rock on May 13, while eight Bulldogs made the 3A all-conference list this season.

Anyone who has attended a soccer match this year, either on the road or at home, noticed number 15 weaving in and out of the opposition players stealing the ball, clearing it downfield, or blocking a run on the net. Senior Emmanuel Thao is the backbone of the Bulldog defense. His defensive prowess caught the attention of several coaches in both the 3A-1 conference as well as the state 3A. During recent voting for the Arkansas All-Star Team, Thao received enough votes to land him the first alternate spot on the team. This translates into the fact that, should any one of the regular members not be able to participate, Thao gets that spot on the team. In addition to this honor, Thao was also named to the 3A All-State Tournament Team. Back in Decatur during the annual sports award program, Thao earned the Defensive Player of the Year award in soccer.

But it was not always just defensive play for Thao. On a few occasions, he was moved up to the offensive front line where he managed to make three goals this season.

Another senior who earned distinction on the offensive side was Carlos Hernandez. Like Thao, Carlos Hernandez was named to the 3A All-State team. He led the Bulldogs in scoring with 17 goals, including the one he made during the first-round state playoff match with Maumelle when he slipped the ball into the net, putting the cap on the win. Because of his hard work and dedication to the Bulldog soccer program, Carlos Hernandez earned the Most Valuable Player award, which he received during the sports awards program on May 18.

Following close behind in the points department was Roger Hernandez, who chalked up a total of 13 goals. For his efforts, he earned the Bulldog Offensive Player of the Year award.

Junior Christian Ramirez is the third and final member of the 2021 Decatur Bulldog soccer team to be named to the 3A All-State Team.

Former three-year assistant coach Daniel Meyer was at the helm of the Bulldogs for his first head coaching job this season. Combined with assistant coach Grant Hutson, the Bulldogs enjoyed one of the best seasons in several years. The Bulldogs played an incredible 18-match schedule this year. When the dust on the field settled after the Harding Academy match in North Little Rock May 14, the Decatur Bulldogs ended their amazing season with 11 wins, six losses and one tie overall. The Bulldogs finished the 3A-1 conference race with nine wins, four losses and one tie for a second-place finish in the regular season behind Green Forest, which went on to take the state 3A championship match May 22 against Harding Academy, both the teams to which Decatur lost. 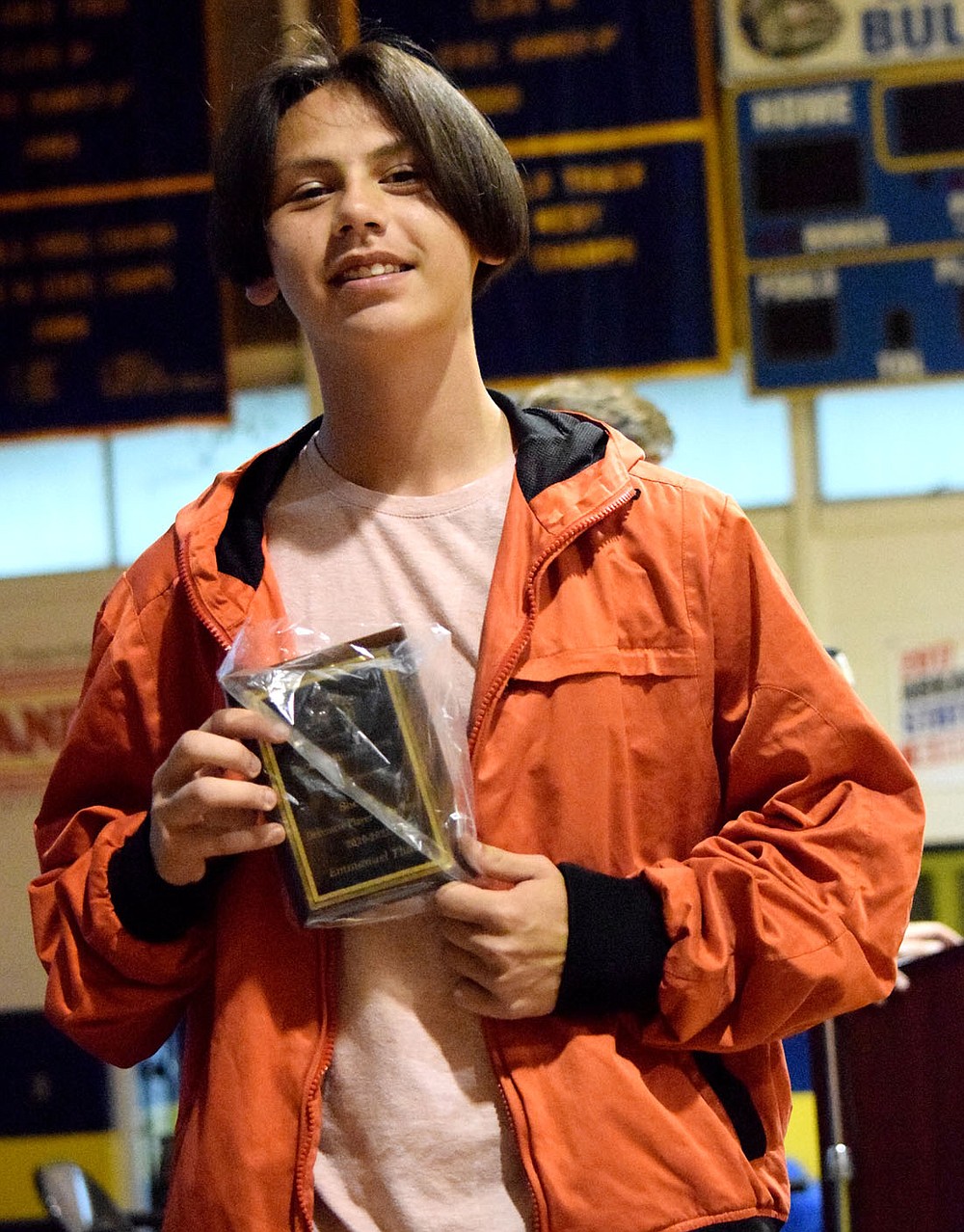 Westside Eagle Observer/MIKE ECKELS Senior Emmanuel Thao displays his Defensive Player of the Year in soccer award during the Bulldogs Sports Award program at Peterson Gym in Decatur May 18. Thao was named to the 2021 Arkansas All Star Soccer Team as a first alternate as well as the 3A State Tournament Team and 3A All Conference. 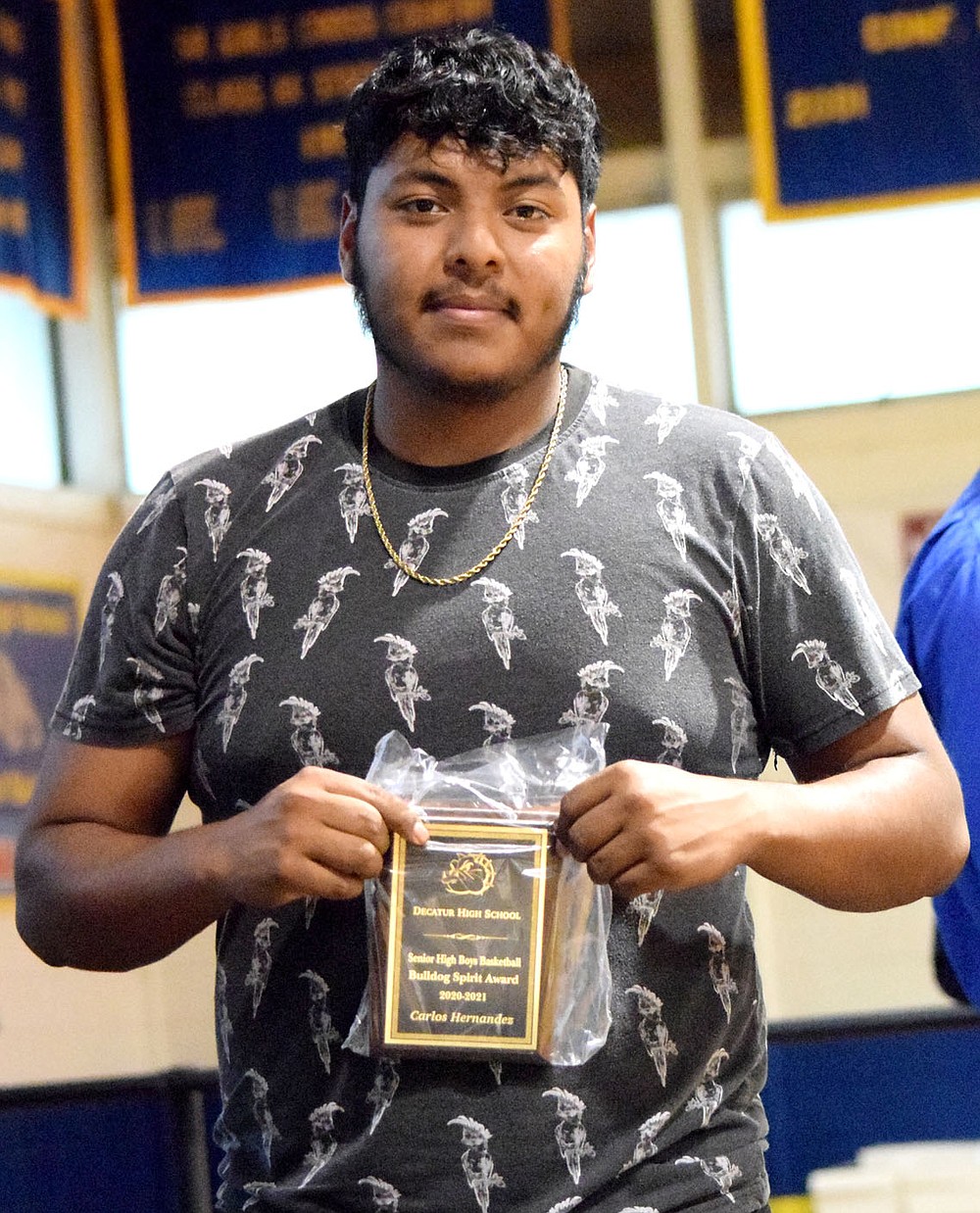 Westside Eagle Observer/MIKE ECKELS Carlos Hernandez displays his Bulldog Spirit Award in basketball during the 2021 Bulldog Sports Award Program in Decatur May 18. Hernandez was the backbone for the 2021 Decatur Bulldog soccer team leading the offensive drives with 17 goals this season. His efforts earned him a sport on the 3A State Soccer team as well as the Bulldogs Most Valuable Player of the Year award he also received during the sports program.
ADVERTISEMENT