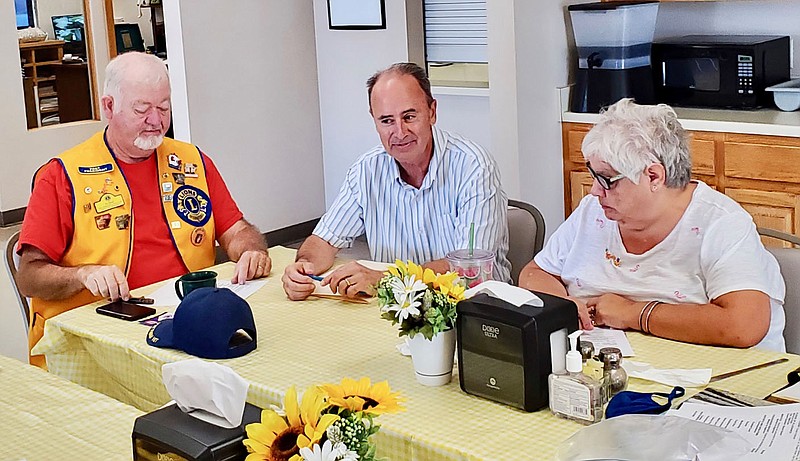 Photo by Jeff Davis Steve Harari (center) visits with Gravette Lions Club members Al Blair and Melissa Williams at the Sept. 7 meeting of the club. Harari was guest speaker at the meeting and shared information about his background; his business, Narrow Path Advisors; and his new role as president of the Greater Gravette Chamber of Commerce.

GRAVETTE -- Steve Harari, president of the Greater Gravette Chamber of Commerce, was guest speaker for the Sept. 7 meeting of the Gravette Lions Club. Harari told the group about his background and employment history, shared a bit about his business, Narrow Path Advisors, and talked about the Chamber and some of its activities.

Harari grew up in New York State and lived in California for 40 years. He attended Swarthmore College in Pennsylvania and later Stanford Business School. He has an extensive background in business, having been CEO of six companies and founder or creator of over 20 others. He said his main interest is in developing new products and technology. He was head of one of the first companies to take credit cards over the internet. He told an amusing story about developing a findable golf ball that contained a small chip to help the owner locate it. He thought it would be a hot item but said it was not successful because golf ball manufacturers would not push it, wishing instead to sell more golf balls.

Harari's business, Narrow Path Advisors, specializes in business coaching and strategy consulting. He advises business owners on ways to accelerate growth and profitability as well as how to position their companies to attain the highest sales value. He mentioned that the worst way to sell a business is to officially put it up for sale, a step that typically reduces valuations by 25-50%. Rather, he helps owners identify strategic partners, reposition the business as needed through website and social media messaging, and pursue an 18-36 month process that is aimed at maximizing the final sale price for the business.

Harari became Chamber president on June 18 and says it now has about 80 members. He has developed a mission statement for the organization and has done a member survey to solicit feedback. He says he hopes the Chamber will be a "catalyst for business growth, a convener for leaders and a champion for the community" and he has developed a motto for the group, "Inspiring Prosperity." He told the Lions that the Chamber now has an office in his building at 109 Main Street S.E. and said his goal is to help all area businesses thrive.

Club treasurer Jeff Davis gave the treasurer's report and reported that all repairs have been done on the foosball court and he had recently mowed and trimmed around the court. He reported that $238 had been collected from pecan sales and said they seemed to be selling well at the farmers' market.

Davis also reported receiving a thank you call from the recipient of a pair of glasses the club recently purchased. He presented an application from another person seeking help to get a pair of glasses. Members considered the application, which met the income guidelines, and voted to approve it. He also reported that he and Lion Karen Benson are working on a grant application in hopes of securing $1,300 to help with the purchase of additional glasses. He said members want to always have enough funds on hand to purchase glasses for any qualified persons who request them and, since the club is now getting referrals from the Gravette hospital, he expects those numbers to increase.

Club president Linda Damron reported that all food from the club's July food drive had been delivered to the food pantry. A short discussion was held on membership and members were told that the most effective way to get new members was to "just ask one."

Club members made plans to meet and make adjustments to the vision screening machine. When it is reprogrammed, they will soon set dates to test the eyes of pre-K and kindergarten students at Glenn Duffy Elementary School. Plans for the club's annual White Cane Day were also announced. The fundraising drive was held Saturday, Sept. 18, at three locations in town. Proceeds of $256 will go toward sight conservation work in the area.

Members voted to postpone refinishing the benches at Hillcrest Cemetery until spring since the planned crockpot fest was canceled and there will not be as much money in the treasury as expected. A meeting to do cleanup and add mulch at the cemetery was set for Saturday, Oct. 23, at 10 a.m., and the club announced plans to participate in the city's Trick or Treat on Main Street on Saturday, Oct. 30.