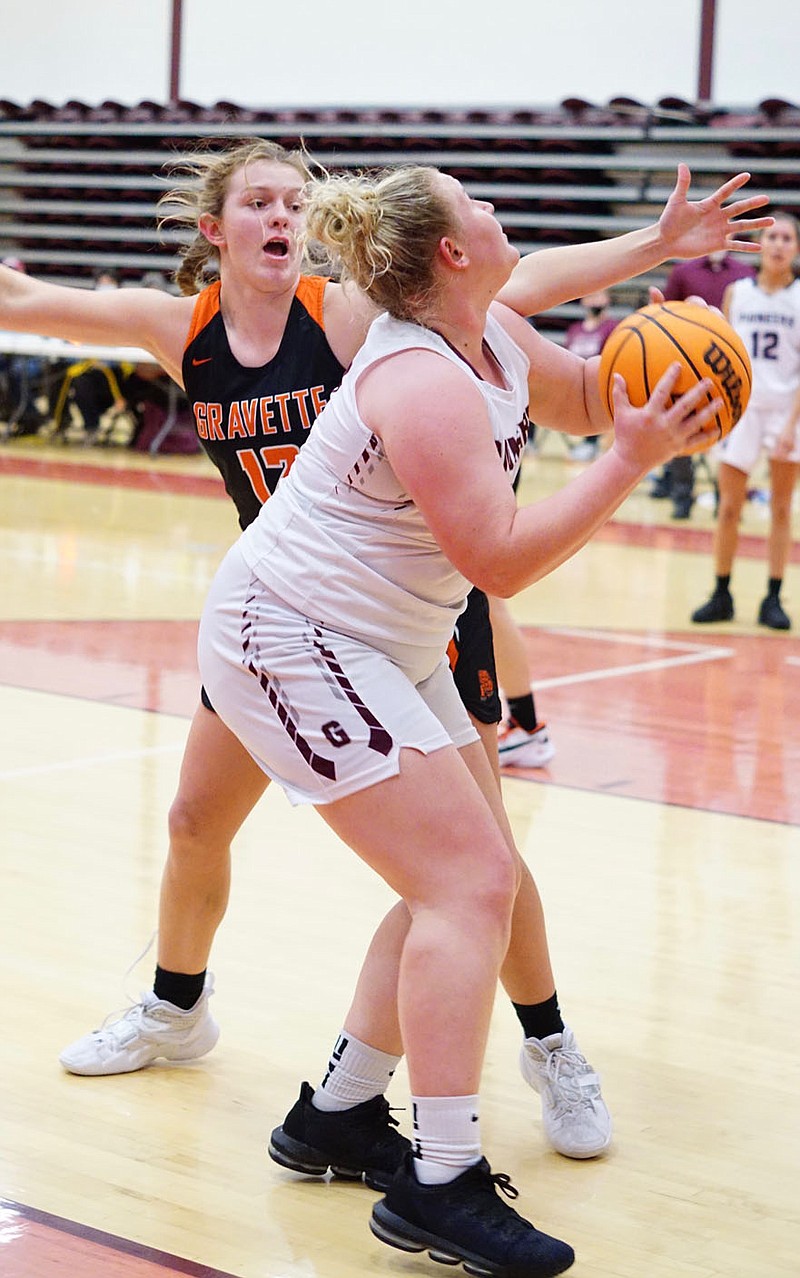 Westside Eagle Observer/RANDY MOLL Gentry senior Emily Toland looks up to shoot from under the basket while guarded by Rachel Deihl of Gravette during play in Gentry on Friday.

GENTRY -- The Pioneers couldn't stand up to the visiting Lions on Friday, falling in a rivalry game, 55-30.

It became clear early on that Gravette held a huge advantage under the basket with Tristan Batie batting down Gentry shots under the basket and easily sinking the ball on the offensive side. More than once, Batie went up and dropped the ball through the hoop. It was for that reason, the Gentry fans rose to their feet and cheered when Gentry sophomore, Brayden Feathers, probably the shortest player on the court, surprised Batie from behind and batted the ball away as he went up to shoot under the basket.

The Lions quickly took control of the game, outscoring the Pioneers 16-6 in the opening quarter. And, although Gentry appeared to be holding its own by outscoring Gravette 10-9 in the second quarter, the Lions pounded the Pioneers in the third quarter, 16-4, and then cruised to an easy 55-30 win.

Gentry's strong point in the game was holding Gravette to only 55 points.

High scorers for Gravette were Batie and Michael Duke with 11 points each. Cordell Donnell added 10, Johnny Dunfee 8, and Brady Hunt 6. Other Lion scorers were Jake Carver, Brooks West, Lane Wilkins and Will Betz with 2 each. Alex Beard added a free throw.

In a much closer contest, the Lady Pioneers gave the Lady Lions a run for their money in Friday night's game at Gentry High School, with the Pioneers in the lead several times, including being up, 48-45, midway through the fourth quarter.

The Pioneers held the lead by one at the close of the first quarter, 14-13. Gravette fought back in the second and outscored Gentry 19-12 to take the lead. After three, the score was close again, 45-42, but still in Gravette's favor. Though the Lady Pioneers hit the ground running in the fourth and regained the lead, Gravette added 15 in the final quarter to Gentry's 10.

Shylee Morrison led the Gravette girls in scoring with 28 points, 17 of those in the second quarter. Reese Hamilton added 10, Dalacie Wishon 8, Kaylan Chilton and Lizzy Ellis had 6 each, and Rachel Deihl had 2.

Leading the scoring for Gentry was Alyssa McCarty with 24. Emily Toland scored 11. Other scorers included Randi Jo Bolinger with 6, Jaiden Wilmoth and Liberty Brannon with 4 each, and Darien Welch with a 3-pointer. 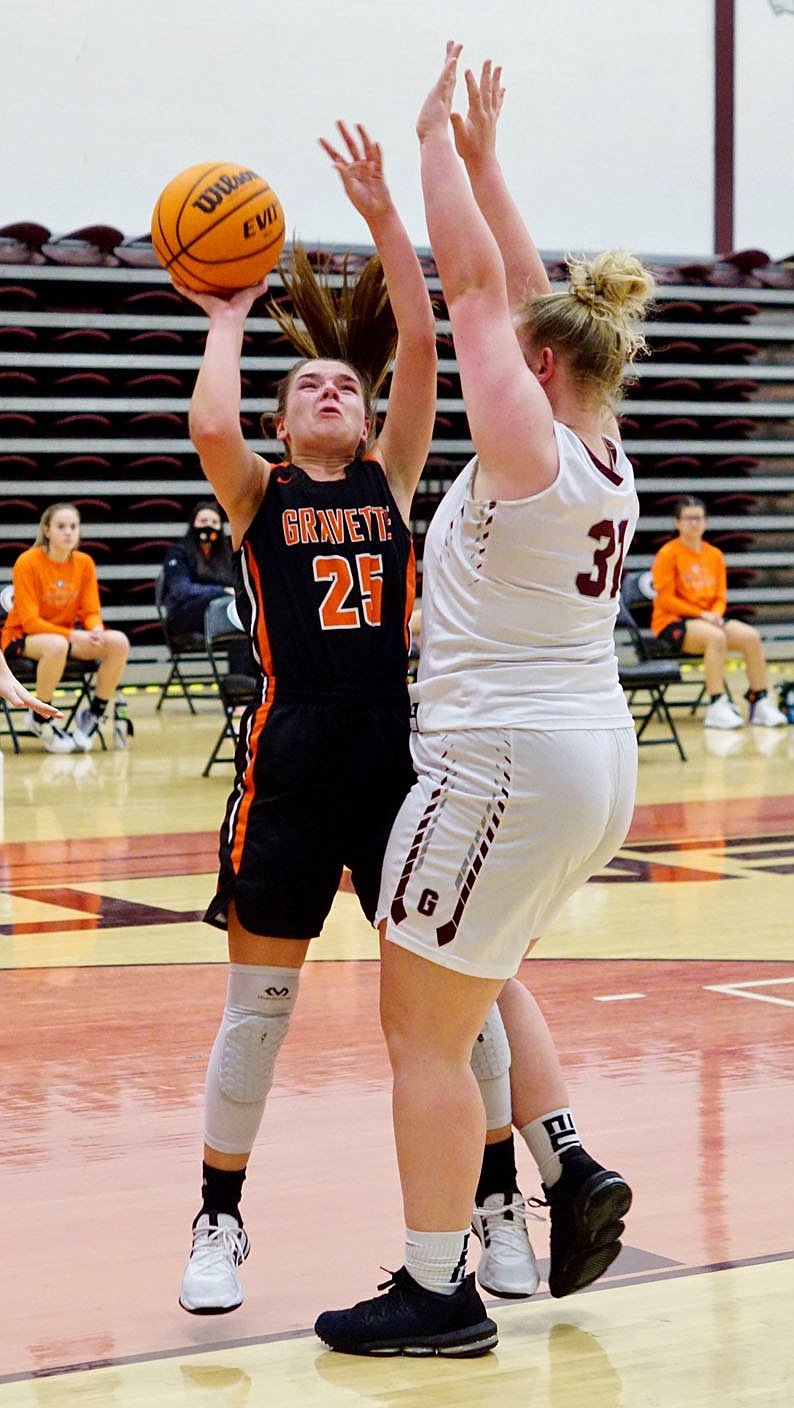 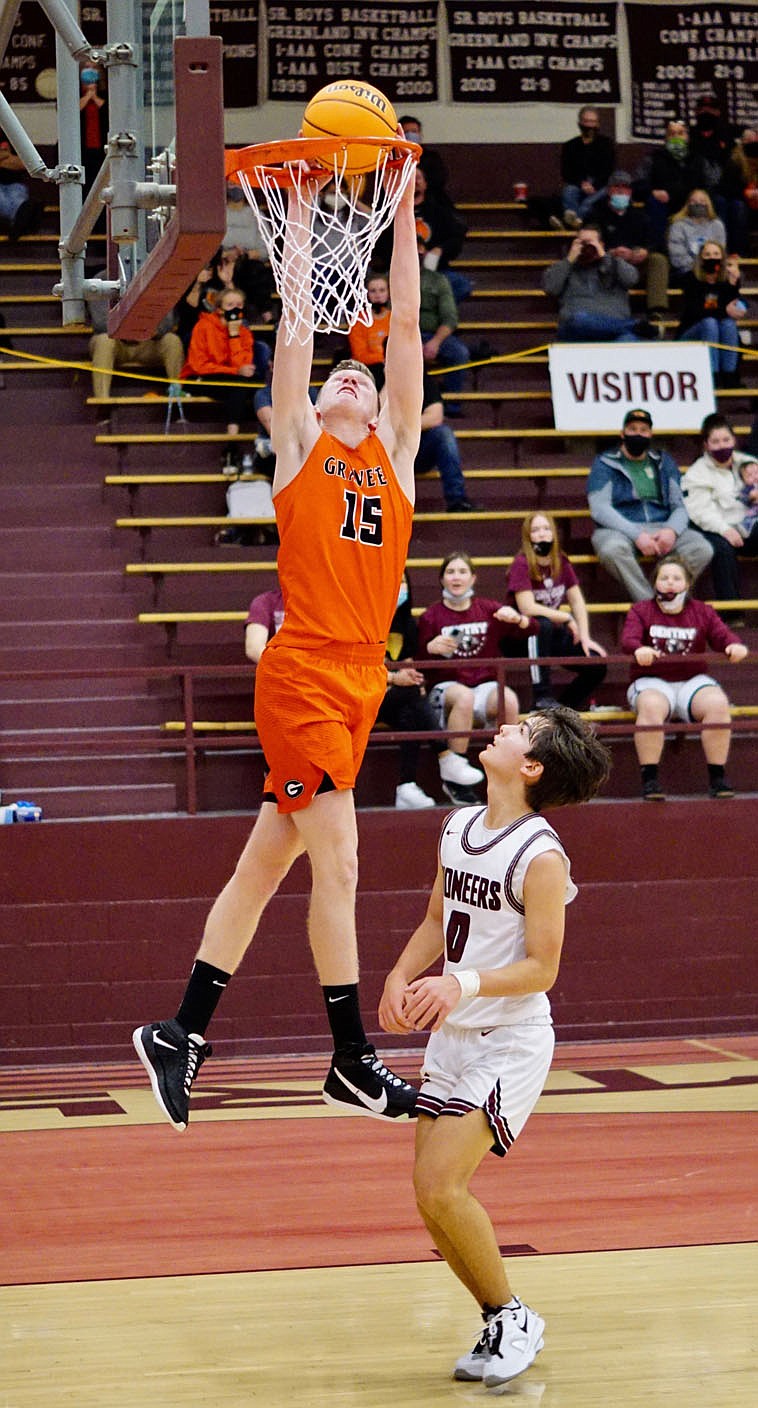 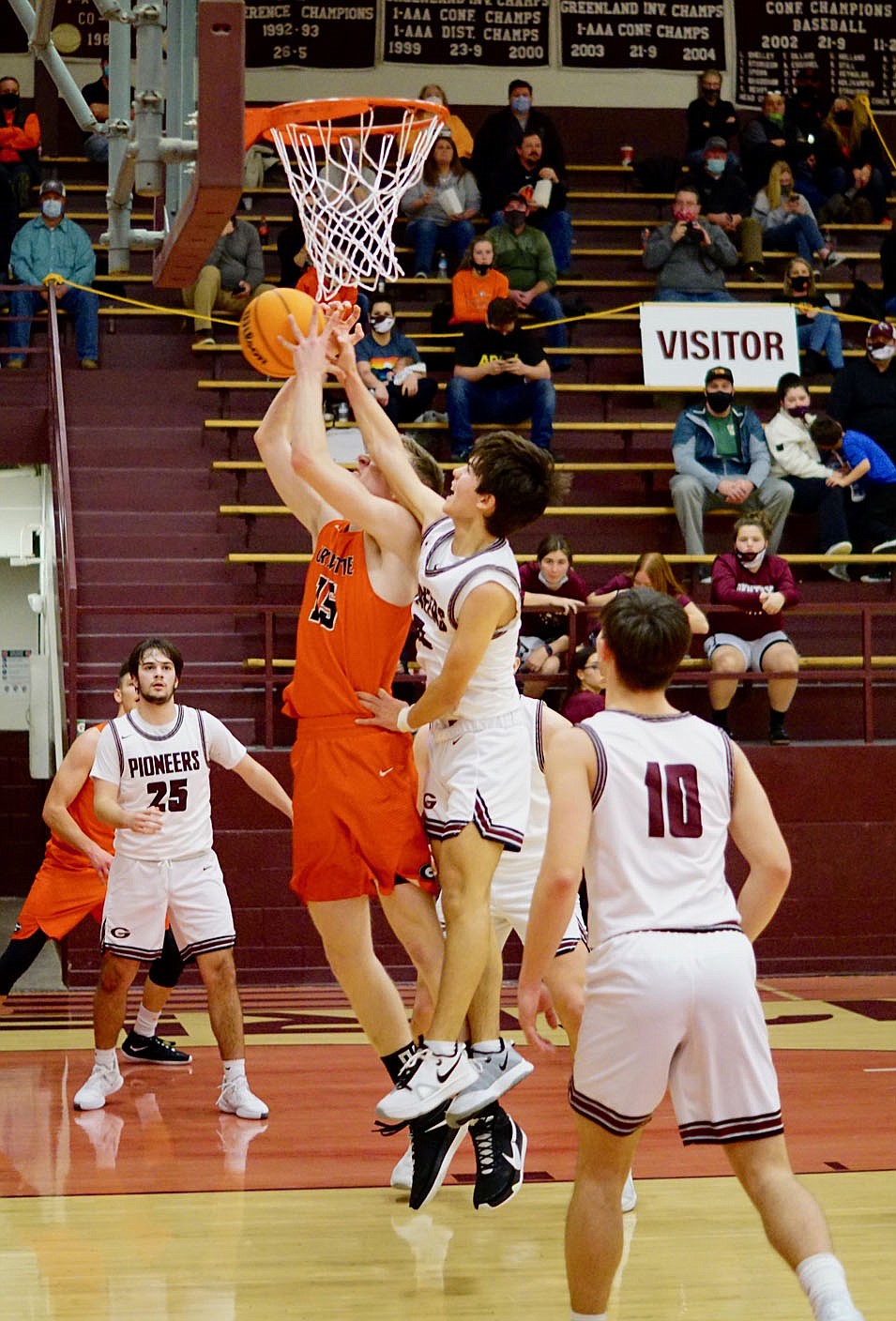 Westside Eagle Observer/RANDY MOLL In a suprising play by Gentry sophomore Brayden Feathers, he knocks the ball out of the hands of Gravette's Tristan Battie as he went up to shoot during play between the two teams in Gentry on Friday. 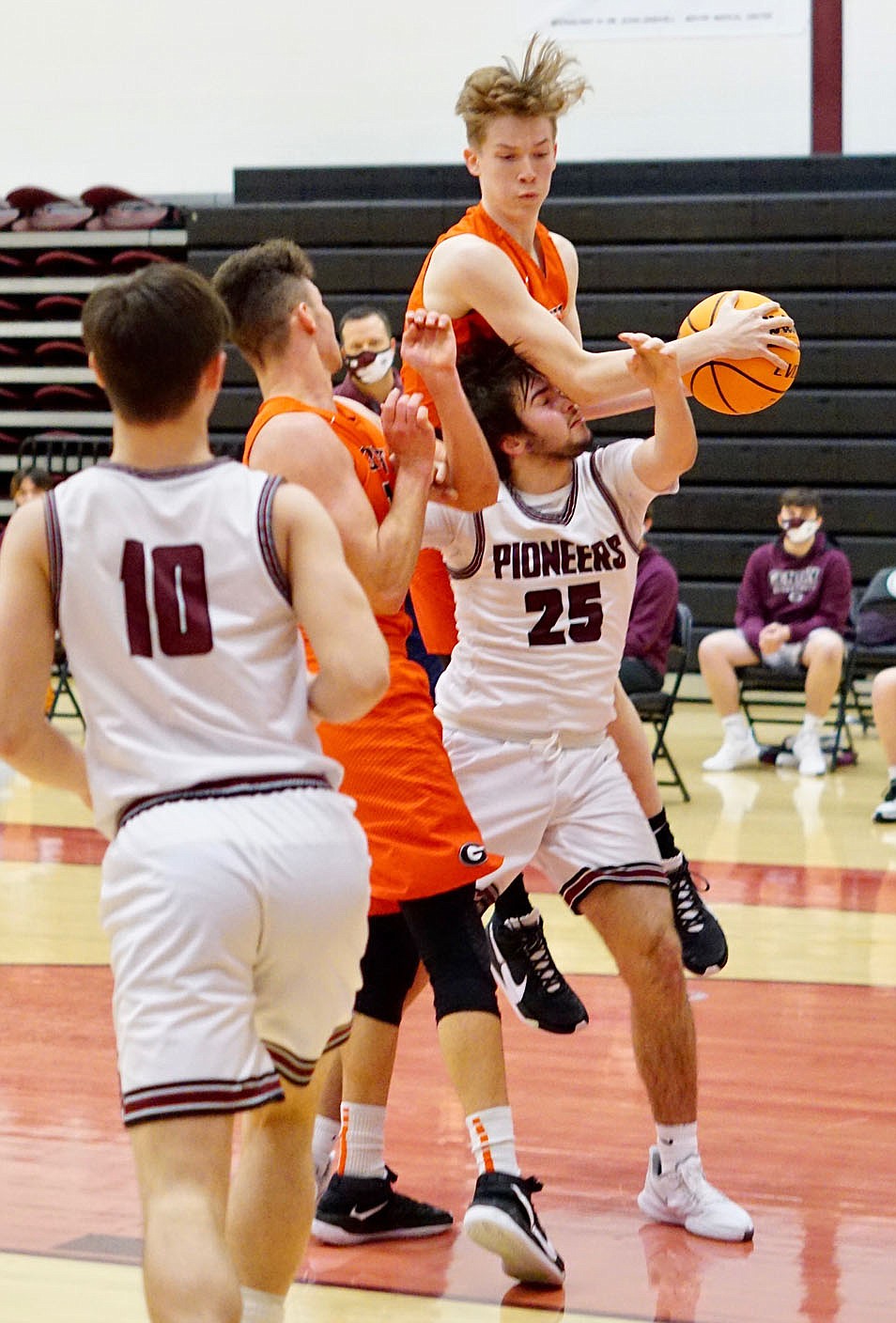 Westside Eagle Observer/RANDY MOLL Gravette's Brady Hunt grabs a rebound and comes down on top of Gentry's Jonathan Corter during play in Gentry on Friday. 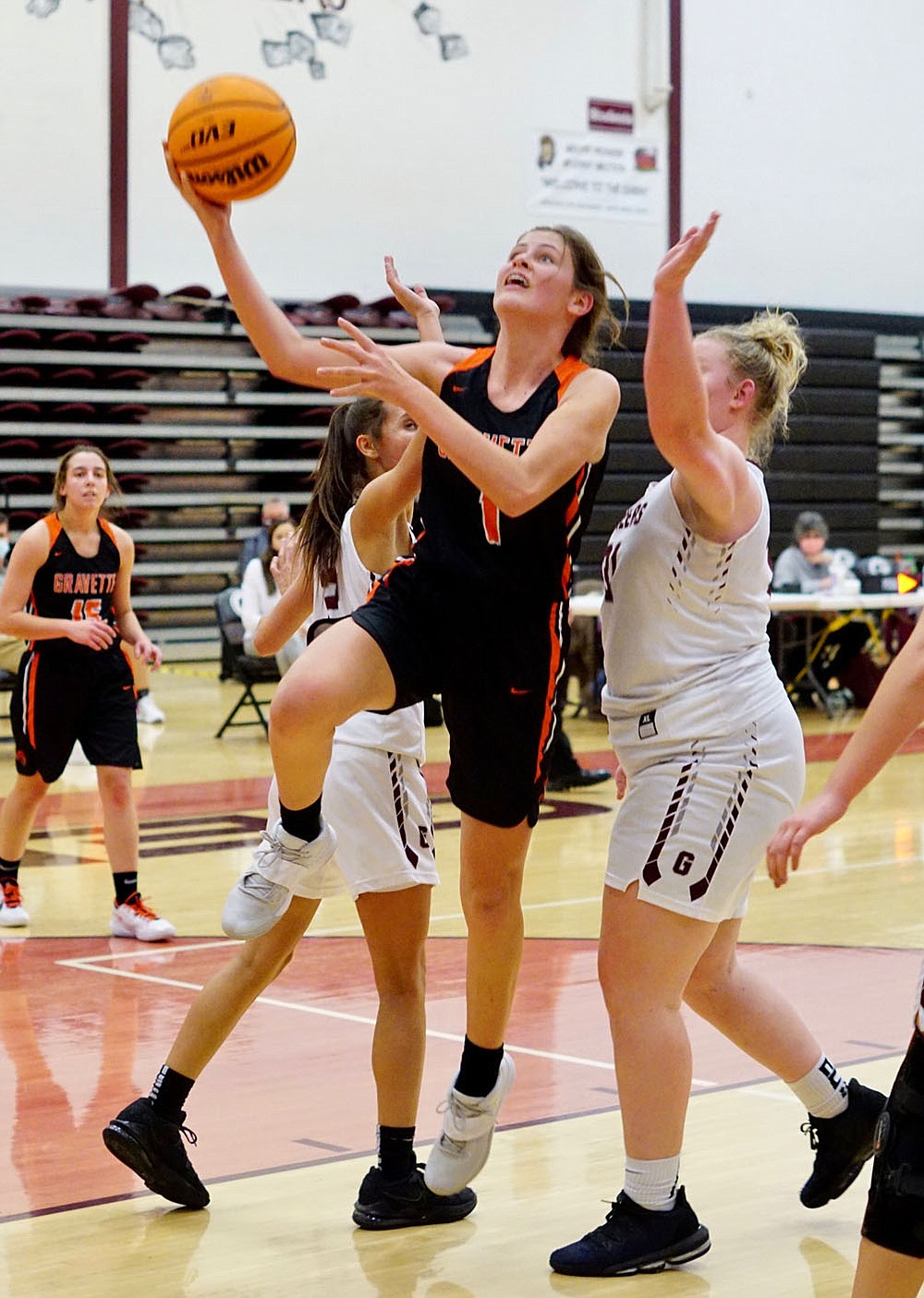 Westside Eagle Observer/RANDY MOLL Gravette's Dalacie Wishon breaks through the Gentry defense to shoot during play between Gentry and Gravette at Gentry High School on Friday.